Nowadays, the declining marriage ratio puts forward a question: “Why are people afraid of commitment?” especially men! Is this the idea of sticking to one woman or a fear of losing liberty of hanging out with other girls? Here is a list which answers your biggest dilemma: Why do guys fear commitment?

What is this horrific c-word men are really afraid of!?

The relationship between a man and woman is seen with different perspectives by each other. While, on one side the woman starts imagining for how would they get committed, live together, hang out with families and finally tie a marriage knot, the man on the other end runs far away from such thoughts and simply wants to have his space-of-life, led alone in his own ways. 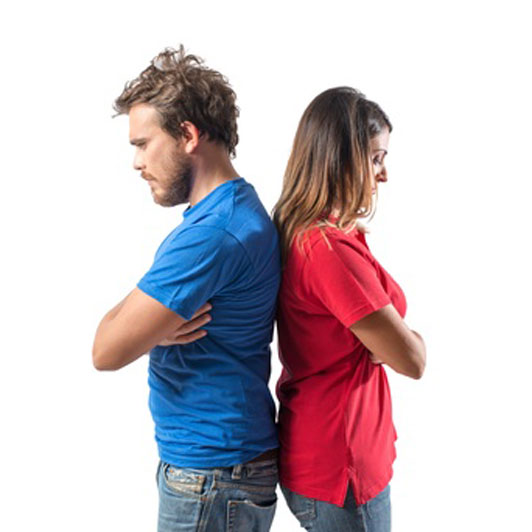 This contrast is the result of men fear of commitment, which is elaborated here for the sake of those women who are confused about why men fear commitment?

10 Obvious Signs of the Fear of Commitment that Women must Know for Understanding Why are Guys Afraid of Commitment?

He loses the chance of dating other women in the future

In order to fully understand how to get your man to commit, you must beforehand find out the men afraid of commitment signs. First of all, a man fears commitment because he is afraid of losing his freedom, a freedom to date other women; a freedom to think of others; a freedom to keep looking for better girls out there. When he learns that her woman is asking for a commitment, all he sees is himself getting tied within knots, pulled by one woman only!

The fear of commitment phobia is quite prevalent among immature guys who keep on dating one woman followed by another, in order to keep looking for his better half. However, when a woman dates a guy, she cannot bear him meeting other women or even thinking about them. This way, she forces him to stick to herself only, which eventually disturbs the guy who is still under decision of either keeping her, or moving on to someone else in her mind.

He has got other priorities to look after

One of the top reasons for fear of commitment of men is that he is unable to manage other aspects of his life along with his love-life. He has family, friends, job and other matters which he gives higher priority than the commitment. Seeing you getting into a commitment with him, all he sees is a wall being built between you and him, and his other personal life matters.

He has bad past experiences of commitment with other women

Guys’ fear of commitment is often interlinked to their pasts. Has he been committed to some other woman who broke his trust by cheating him? Or has been a divorce who failed to manage a healthy relationship with his wife. Whatever the reasons be, but often such past experiences of commitment with wrong women gives birth to a fear of commitment in men who eventually sees and interpret all other women the same way.

He is unsure of the success of the relationship

Another men fear of commitment signs involves their ambiguity of achieving a 100% successful relationship. Men that are afraid of commitment would always think of risks associated with the relationship with their women. Such vague uncertainties keep him away from investing more energy into the relationship, and eventually they draw back.

He is simply not much into you

By know you must have understood quite clearly that why are guys afraid of commitment? Now, in order to think of ways of how to overcome fear of commitment of your guy, you must know some more reasons of why men fear commitment. Normally, the fear of commitment rise among guys who are not serious enough for the ongoing relation. May be your guy simple want to date with you and hangout, he has never even thought seriously enough of you of getting committed with!

Have you ever thought why do men fear commitment when women speak about it? You must be thinking asking a man to commit does not arise a fear in him at all. It is true, but a fear of commitment truly rises when you start pressurizing him for getting into a commitment with you. Forcing a man to make a vow with you is not a proper way of how to make a man commit. Always remember that forcing leads to frustration by the forced one. A forced response will simply never make your love-life blossom.

He is afraid of getting committed to a greedy, selfish woman

The answer of why are men afraid of commitment is hidden behind the bitter personalities of some women. Suppose your guy commits with you and agrees to getting married, you will be totally freaking out. He might take you to pre-bridal shopping and let you meet his family. But if you are a greedy and selfish who spends his money a lot and acts weird and selfish among his social circle, he will never continue the idea of getting legally bound to you. Just think of yourself getting committed to a materialistic, self-centered man, and you will eventually think also “Am I afraid of commitment”. The answer will be…you guessed it. A yes!

He does not want to make compromises

Why are men afraid of commitment? The answer is plain forward: they are afraid of it because they hate to make compromises with women who simply do not do so. A commitment is made successful only when both of the spouses make compromises on equal levels. However, the fear of commitment gets strengthen within a guy when he sees you either getting you do things her own way, or simply knocking you off for not doing so.

He simply can’t trust you

By now, you must be thinking of ways of overcoming fear of commitment of your guy. But do not forget this last reason of why do guys fear commitment? Women are generally seen as untrusted entities. Even though it is a bitter reality, but it is truth! A woman will quickly switch to some other man and break previous commitment for the sake of more money and luxurious being offered to her. And it is quite obvious that such guy will surely not want to get himself broken for a woman he simply can’t trust fully!

Posts Related to 10 Fear of Commitment Signs a Guy May Be Slow to Commit That We Thought You Would Like: Staff Picked Interesting Articles Worth Reading

Nobody wants to be a rebound girl because men are only using these girls. In case you are not sure about your relationship, you should look for some of the signs. In case you do find them, you should make sure to get rid of the relationship as soon as you can to protect yourself. He shouldn’t have the satisfaction of playing with you.

←Previous Why Should You Date a Nice Guy? 8 Reasons to Quit Bad Boys
4 Fashion Trends for Summer Outfit Ideas to Spring into Summer Next→