While being in a love-bond, a woman tries to save it from becoming a toxic relationship. But it happens when your man starts acting strange and creates a mess, which ruins your feelings toward him. Here is a list of some of those red flags in relationships for women which they must check out before it's too late.

Don't ignore the early warnings of being in a dangerous relationship

Once a girl plunges into a relationship with her guy, she tries her best to make the best out of it. But this cannot happen always. Real life is not like it is in the fairy-tales. I mean, princes and heroes exist in imaginations only, but reality is quite bitter. Let's face it; girls ignore certain things of their guys which ultimately become unbearable in a short time ahead. You can even call it our blind spot. 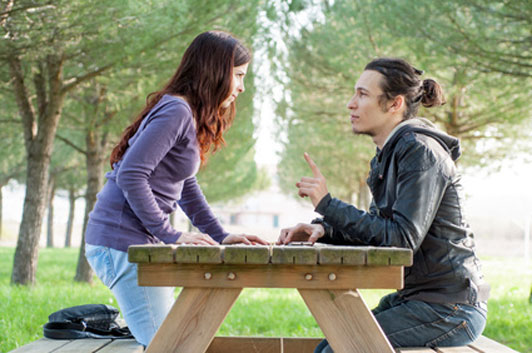 That’s why, nowadays, girls are seen frustrated with the behaviors of their guys. However, they can end this frustration if they know which dangerous relationship red flags are transforming their ideal dating to a red flags dating.

Make your decision today that whether your guy is eligible enough to stay with you in long run, or is it the time to bade him good-bye. Here is a good old list of the obvious and various subtle relationship red flags which can make you realize that either you are having a worst date of your life, or the one you can wish for.

He makes you do everything

Unhealthy relationships are found among those couples who fail to keep the balance of affairs between them. One of the most obvious red flag in your relationship is that if your guy shows no concern toward deciding dates and other relative activities. It is rather you who is expected from him to decide stuff. This clearly points to his sheer carelessness towards helping the relationship move forward on to bigger and better things.

Relationship red flags portray a clear picture of a wrong guy as the one who gets irritated when you ask questions relating to future prospects of your ongoing relationship. He will show certain signs of red flags dating by being unable to discuss about marriage and other commitments. Either by simply changing the topic, being unsure or asking for extra time, her will avoid answering your necessary intuitions. This clearly shows that your guy is definitely not a relationship-keeper.

Relationship problems get wider when apologies start losing their worth and meaning, when confessions and regrets are made with no real intention to correct them ahead. When your guy has poor people skills, he will try to cover it up but certain behaviors might reflect his true intentions. For example, let's say "you made a real mistake" but he doesn't accept that you acknowledge it and merely says “forget about it already!” He thinks it's over. More importantly, he wants you to believe that it is. Is it? I don't think so. And neither should you. Period.

He does not opens himself much

One of the most unnoticed relationship red flags is related a girl ignoring the fact that her guy is too suspicious and always wears a cloak of secrets which he never reveals much at all. This hinders you from knowing his true motives, feelings and state of mind toward you and the relationship. This invites to birth of a toxic relationship in which you tells most of all, while he literally holds his tongue by not discussing his internal life affairs of family, friends etc. This ultimately hinders the growth of your relationship in which eventually you become uncomfortable with his silence.

He does not take you along in his social gatherings

A long distance relationship demands the guy to be proud of his girlfriend and take her along happily in his social gatherings. But what does it shows when your guy hesitates to introduce you to his family, friends and relatives? Do you not make him proud of yourself? Or he is simply not that much into you! In both cases it clearly shows two things. Either the guy wants to keep you as an unexposed girlfriend, or his friends and family are not impressive enough to treat you well. Anyways, the best relationship advice in this case is to set yourself free of such a guy.

A dysfunctional relationship is strengthened when your guys engages and disengages without continuity. One week he is hanging out with you daily, the other one he is not even contacting you through text messages. This puts you in ambiguity that whether he had enjoyed your company or is he merely waiting for you to make the first contact. In both scenarios, you must be confused and seeking for what is the best relationship advice in this case. Here it is – your guy is not worth of you if he is not interested enough to praise and value your company at all.

He is too lazy and lacks active hobbies

Red flags in relationships become more obvious when you start analyzing the behavior and hobbies of your guy. Does he watch TV all the time, misses his office work, and do nothing else then having endless hours of sleep? If so, then you are wasting your valued time by valuing a useless guy who is wasting his life and holding nothing interesting at all. A girl mostly adores sports guys and those who are sincere toward their jobs. And they must be, because a guy with good hobbies and active routine ultimately reflects a strong and responsible future partner for sure.

He wants to change you

There certain red flags in relationships for women which seem normal but actually prove to be brutal for your relationship. For example, your guy does not praise your dressing, habits and way of talking. He suggests you to follow some other girls, groom like a specific one, change your way of talking and loving him etc. At first, you might follow his advices (actually demands) and tries to transform your personality to his dreamed one. But does it shows you are leading toward a healthy relationship? Not at all. Always remember that your RIGHT guy will love you for what you are. If he doesn’t, he is the WRONG guy!

He makes a mountain out of a molehill and lies

Do you want to uncover one of the most underestimated relationship red flags for women? There is the one – when your guys lies too much, exaggerates and omits important things which needed to be told for maintaining an honest relationship. It is quite obvious when he is not being honest to you, then he can betray and shatter you at any second. Since you will never want this happen to you, so it is best advised to stay away from such a liar and hideous guy.

He makes you cry most of the time

One of the most critical relationship red flags which you should not overlook is when your guy makes your cry more than he makes your laugh. Of course, you have not committed to an onion! If he is a totally heartbreaker, bade him a good bye!

Posts Related to 10 Most Dangerous Relationship Red Flags That Girls Ignore That We Thought You Would Like: Staff Picked Interesting Articles Worth Reading

How Much is Too Much? 6 of the Most Dangerous Addictions in Modern Society

It’s easy to become addicted to any of these, and much harder to break the addiction. How much is too much? The line between healthy and unhealthy behavior is very thin. Depending on how severe the addiction is, it can end up ruining your life. Awareness is the first step toward preventing self-destructive behavior. Be careful to not fall into any of these six tempting traps.

For leading a long-lasting relationship, girls seek means to do every possible thing for making it work out. She tries to be extra caring, affectionate and sincere toward her guy. But is it all enough to make him hold on to you in a long run? Probably you are neglecting one thing! In order to keep him longer, you need to know the following guy things to do that he even though never showed, but need to be done to get him!

←Previous Getting out of the Friend Zone Ever? 6 Stay Just-Friends Questions
How to Catch a Cheater with 4 Signs He's Not That Faithful Next→