How you get a guy to like you for you isn't easy. Luckily enough, that are ways to ways to make your crush less invincible.

Is advice on how to get a guy to like you for you, leaving you with nothing but a flat chest of confidence? Then, it may be time to turn up the social bandwidth. After all, it is the 21st century. 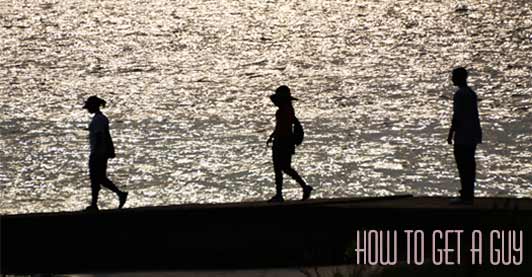 With the advent of social networking, more and more guys you like are online and probably, spending most of their time tweeting or microblogging on Tumblr, and what not.

Does that make your crush invincible?

The social ecosystem may have changed for getting a guy to like you for who you are but the game hasn't changed one bit.

What has changed since the days of old school blind dating

How was it like?—Dating in olden times.

Nowadays it doesn't matter if you are living in the boondocks, when you want to get together with friends or even scheme in on setting up a double date, all you have to is press the send button. Does this sound remotely familiar? If it does, you should feel luck because it never used to be that way.

Back in the day, when you wanted to see someone you had to call them up blindly and hope the person you want to talk to will be the one who picks up, talk about blind date.

Going out used to be about holding hands and sharing a sundae. Now its about being Facebook friend's and getting tagged in a picture. Listen to me rant. Dating back in the day wasn't that bad, was it? Neither is it now.

Now let's get to the point, how to get a guy in the 21st century.

In dating, there is a fine line between trying to get a guy to like you and trying too hard to be liked. On the other hand, the only way you are going to hook up is to try. The trick is to make it seamless like you did it without even trying.

Even if you've somehow reached the highest level of cling, it's better for you to keep your hands your hands to yourself, including clinging behavior. That is to make it appear highly unlikely that you are something that clings, even if you deep down inside happen to be a little clingy. He doesn't have to know that. If you have a history of clinginess, remind yourself to stay in stealth mode.

You see, most guys treat clinginess in the same way as you would be handle being talked to some guy you don't even know while waiting for the bus. Awkward.

Being too serious about where things are heading is a one way ticket to the cling-zone.

Stop being a drama queen about everything, unless he thinks it's cute

Nobody likes a drama queen.

I know some guys think it's cute like a chiwawa chewing up a feather pillow, but there is only one catch. At first you don't know whether or not he doesn't mind you can be a drama queen from time to time.

Since you don't know at first if he minds that you are a drama queen, you are going to have to keep it under the hood. To do that may require a little work on your part, if you are the type that likes to vent often.

If you have to be a drama queen, never focus the energy you are venting out directly at him. This will definitely turn him away. If you have to vent around him, it is best to do it in a way that he is not affected.

Show off attributes that make you stand out

Attributes are the quotes and exclamation marks of how you carry yourself. In other words, they are what he clings on before deciding that you are hot.

If you got curvy girl problems, the answer is how to dress to make your curves dangerous. The same goes for other body types. No matter what your body type, highlighting your attributes with the clothes you were is the most seamless way to stand out.

Another attribute that will make you stand out is your personality.

Keeping your personality in check will ensure that if you do hook up, he will like you for you, not just for how you look or the act you put on while around him. That means on top of everything else you are doing to get a guy to like you, be yourself.

If you can't get him to like you, should you keep on trying?

If you've been trying for some time to get the guy you like to like you and nothing seems to be working, you should take a step back to focus on you.

Although it feels much like quitting, you are actually not. Bringing the game back to you allows you to regroup, not to mention being sucked in.

However if you really can't get him to like you for who you are, then its time to move on. The bright side of moving on, is that you are more likely to get guys to like you than you are while trying. Not only will you have more time for yourself but also increase your chances of becoming a guy magnet. If you ask me, I say win-win. You've got nothing to lose when you stop trying so hard to get guys to like you.

You got a crush on a guy that may not notice you yet.—Who doesn't?

The best thing you can do at this point is put yourself out there without making it look like you are throwing yourself at him. Only then will you know whether he likes you or not.

If something sparked and he does like you, maybe there is some chemistry there. What if that's what you want—but in reality it's all up in the air?

Don't worry about things not working out while trying to get guys to like you. Just keep in mind that what works out in the end requires less work to get started.

Posts Related to 21st Century Guide To Get A Guy To Like You For Who You Are That We Thought You Would Like: Staff Picked Interesting Articles Worth Reading

Higher Education: Is Going to College a Good Choice for Me?

To go to college or not to go to college? That is the question. Good parents will encourage their child to go to college. But the higher education that your parents got may not be the same kind of experience for you any longer. A college degree now isn’t the same as a degree 50 years ago. What you must ask yourself is whether a college is right for you.

What are Your Hobbies? Guide to Finding Common Interests

It is impossible for two people not to have some mutual interests; they just have to find them. In order to get there, you should read the list of tips we have compiled for you to at least know where to start. Once you get the hang of it, you will be able to talk to just anyone, including the people you just met.