Dating A Peter Pan Man: Things You Have To Know

So you think you may be dating a Peter Pan man or the guy you like is just another one of the Peter Pan men. Before you give him his walking papers, here are some pros and cons to think about. 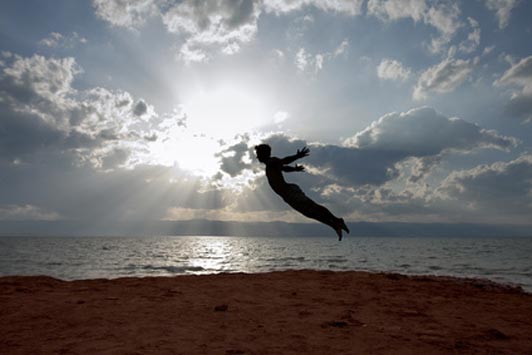 What is a peter pan man like? Pros and cons dating a guy stuck in Neverland

Despite what you have heard about Peter Pan men and their little habits that drive girls nuts, there are some good things about dating a Peter Pan man for girls that want to stay as far away from a serious relationship as they can.

Here is a quick list of things that might make you want to consider to date a Peter Man man.

He's not serious about anything, except maybe playing video games and dressing up for Halloween.

If you just can't stand a guy that is serious all the time, then dating a Peter Pan man may be just for you. He is always up for doing something fun. That includes you if you are into the same things as him.

Most Peter Pan men are good looking or at least think that way of themselves. Great, your girlfriends think your guy or future boyfriend has good looks. If that floats your boat, then good for you.

He has a really nice car.

Peter Pan men like to drive nice cars. In younger Peter Pan men, it might not be obvious. However, older Peter Pan men are more than likely to be driving a really-really nice car. If you are into cars too, dating a Peter Pan man lets you cruise.

He's got his own things he likes to do and is not shy about sharing his interests.

Dating a Peter Pan man has its perks. For one, you don't have to worry about him feeling lonely about you going out with your girls;because for Peter Pan men, there is always something that is tinkling to get tinkered with.

He gets along with his mom.

When a guy gets along good with his mom, you don't have to worry about whether are not his mother is going to like you are not. He will tell you everything you have to do to make out fine with his mother someday.

He has no 5 year plan for moving forward with life.

Not having a 5 year plan is a deal breaker for some girls who want things to move forward in their life faster. If you are dating a Peter Pan man, with this problem, be sure to bring it up before dumping him for a older guy with a awesome 5 year plan.

If he's still in school and you are not, there is a chance that it may bug you a bit. This point, I wounldn't worry about too much. However, some girls like their guys legal; because most guys still in school are not legal. Moreover, he has other priorities than you like studying for test and such.

He doesn't have a real job.

He works at a hobby shop, selling comic books. Go figure. You want him to get a real job but he tells you, "... But the guys at work are awesome. How could I quit?" Yes, you are dealing with a Peter Pan man; but don't sell him short, something is bound to come up in the happenstance that any guy selling comics might be the next Stan Lee.

He always has to make a point that his costume is way better than yours and he probably means it.

Peter Pan men can be so superficial at times. He will give you advice on areas of his expertise. You won't like it. At times he might even creep close to making you feel like you are being friend zoned by him. But he is not. Don't blame him. He is a Peter Pan man after all.

He always hides while you seek.

One thing about dating a Peter Pan man is that you will feel at times, he is trying to avoid you when in fact he is just tinkering with something in the bat-cave.

Bottom line: Will he ever grow out of his peter pan syndrome?

Most guys begin as Peter Pan men. As as they mature, they tend to grow out of peter pan syndrome. That may mean good things for you and him, if you see yourself becoming the serious type within the next 10 to 20 years. He will grow out of it. Just you wait!

There is no way to determine whether the guy you like is a Peter Pan man that gets stuck in Neverland are not. The best you can do is wait. Or in the case of many, many girls that don't mind the adventure of dating a Peter Pan man, enjoy the ride!

For girls in their teens and twenties, it may be too early to be worrying about whether are not you are dating a peter pan man. However, if you feel strongly against his Peter Pan man-ness, then I suggest finding a guy with a 5 year plan.

Girls over 30, may not want to get stuck with a Peter Pan man. He does not meet the required level of maturity you would expect from a guy the same age as you that should already have a 5 year plan. On the other hand if you are dating a younger guy don't expect him to behave the way you want him to, wear clothes older guys wear, be the older man with a 5 year plan of your dreams. Be patient. Just because you may have a Peter Pan man on your hands, doesn't mean you have to go all Hook on him.

Posts Related to Do You Really Want To Date A Guy Who Is Acts Like Peter Pan That We Thought You Would Like: Staff Picked Interesting Articles Worth Reading

How to Get a Prom Date: 6 Steps to Avoid Being Date-less

A prom date is not just any other date and this is why you should put a lot of thought into how to find a prom date. The good news is that there are some tips you could use and we have gathered some of them for you to read through. All there is left for you to do is to follow them and have the night of your life.

Take a Different Point of View: 8 Tips on Dating an Older Man

Being in a relationship or dating an older man who is more mature than you can sometimes result in love issues due to having to deal with some new situations and moments you didn’t thought of. As both of you are in a different place in your lives, you will have to think everything through and be patient with him as he is with you.