We've all been, at some point, in a situation where despite our willingness to reach out and figure out whether a guy likes us or not: it is not always that easy to figure out, or even to gather courage and approach him. When shy guys are in question, should we develop a new skill just to get him to talk to us?

Even though most of us have so gotten used to having guys approach them, a random reality-check can show us that sometimes we are the one who are expected to make a first move or, at least, create a situation where the not-so-confident guy with get an opportunity to make a move. 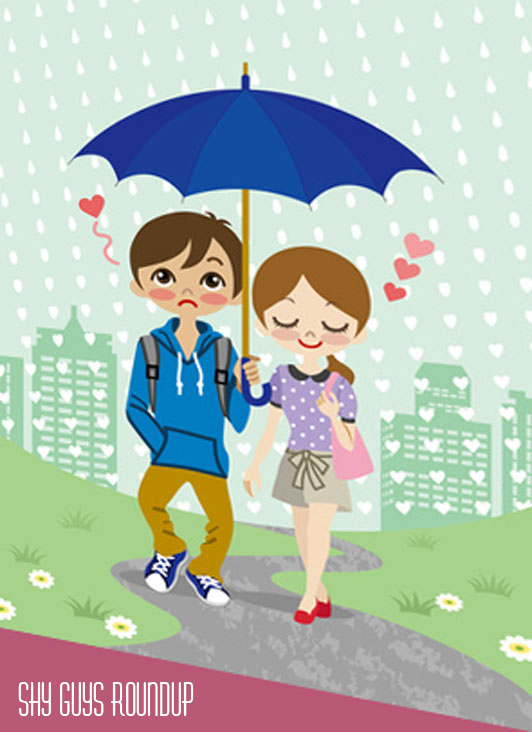 However, if you have no idea how to do that, or you are not even sure if he likes you, we have loads of tips for you in this shy guys roundup, so stay tuned.
In this roundup, we aim to address the issue of what are the 5 things ever girl needs to date a shy guy?

First things first: if you are not sure whether he really likes you, there are some leads you can follow

It’s not such a rare situation that people misunderstand friendly gestures as signs of flirtation. That says a lot about the miscommunication or even lack of communication among people in general, and our problem here is somewhat related. If we can see from his behavior that there is more to it behind those cute smiles, how can we be sure that he really like us, and that he is not trying to lead us on? Here, with a number of short but well said pieces of advice, you can finally make a distinction!
You don’t have to be a profiler or a next Sigmund Freud to figure out which guy should be and wants to become a part of your dating routine - you just need to figure out some details we don’t usually pay attention to. Start with the simple ones: how engaged is he in your conversation? Which things he uses as an excuse to text you? Is he interested at all about your hobbies and the things you like? If you like the answers to these questions you’ll probably like him even more!

Silence is Golden? Does that make a shy guy your perfect match?

There simply is something about a real shy guy that makes them incredibly cute. But they are hard to get to know. It’s even harder to tell when they like a certain girl. And if you suspect that a certain girl is you, it surely drives you crazy that you can’t get to his mind. But don’t worry, if you are really the one he wants, all the trouble about finding out if he likes you is really worth it.
In some cases you can even rely on the tips mentioned in the article above, but just to make sure, pay attention to his body language and sudden change in behavior. Is he all of a sudden acting silly? Is his asking around about you a good sign? Find out with us!

Give him a reason to put himself out there finally!

Believe it or not, even when we are not trying to pull off that attitude, we can seem arrogant to a guy who secretly (or not so secretly) wants to ask us out. Why, you ask? We will probably never know with the boys, but that is just the way it is. However, don’t make a big deal out of it. Eventually, it’s going to happen, and there is no need for you to push it (most likely).
But in case you are wondering why, oh why, are they making such a big deal out of it, another one of our articles is offering you a bit of help in finding the answer you are (not) looking for. Really, have you ever been aware of what’s going on in his mind while he is doing his best to casually chat with you? You would be impressed, and you will be, once you have a look at the list of all the silly ideas they have when we are in question.

If, however, you feel like there’s no time for being patient, we have thought about that, too. Well, it seems that we have thought about everything, haven’t we? And we agree that sometimes it’s simply inevitable if we want for the magic of a flirty look to work we have to be the one to step out and make it happen. That is not always so bad: try it, you might like it.
What we here can do to help you in your first attempts to woo a guy is just give you a couple of ideas: ‘a starter pack’, so to say. Some of the ideas offered are so simple that they fit in only four words, but they surely leave a mark! But, eventually, you’ll grow out of them and evolve into much smoother talker, just give yourself some time to practice.

Honey, have you listened to some Aerosmith recently?

Be him shy, outgoing, heavily introverted, or wild-spirited, once he starts dating you he will eventually bring you to the point where the love games begin. Some of you love that part, yet some others are not really fans of it (and we do understand you, believe it or not) but the truth here can be summed up in two points:
1. playing games is almost inevitable;
2. love it or not, they bring an important dose of excitement and, to be honest, that is not always that bad.
But it is up to you to decide what you are going to do about it. If you decide that you are going for the game, you have to think about the next move you are going to make. Just one more thing: before you decide whether you are going for the ice-queen look, or for the over-impulsive one, remember to not overplay it: otherwise you’ll for sure lose him.

Did we get it all rounded up nicely?

So now you have it. Give it a little time and practice and soon you’ll become a shy guy expert who has no problem picking up guys and asking them out on a date. And trust us, it’s a nice feeling knowing that somebody agreed to go out with you based solely on your approach. However, it’s better not to always be the initiative one. Mix it up a bit…Because that’s the joy of dating!

Posts Related to Shy Guys Roundup of 5 Things Every Girl Needs to Date a Real Shy Guy That We Thought You Would Like: Staff Picked Interesting Articles Worth Reading

Once we start dating, and we want to get to know everything we can about relationships and what guys like, we usually start feeling a bit insecure because it is all new to us. That is why here we can finally figure out some of the great relationship-related mysteries, such as do guys like short girls, and what is it that guys like in a girl.

You have wanted to spice up your love life and want to get to know your other half better and are thinking to go on a double, but how? This article has a list of double date ideas that will help you double date well. Check it out and see it for yourself. I’m sure you will find these ideas very useful.

Find out more about the various types of guys in order to broaden your horizons and to know what to keep an out for (and which men to avoid). Among the different types of guys you will find the ideal man for you, but you have to make sure that you will keep your eyes open for all opportunities to gain as much experience as possible.

7 Single Girl Problems Most Girls Do not Realise Are Real

Being a single girl for you may be completely normal or completely strange experience. Being single as well as being in a relationship has its advantages and disadvantages but it brings completely new and unexpected problems. No matter if you are newly single, or you have been single for a long time, there are some, not so obvious problems every single girl has to face.