Gone are the days when men held the brakes and always had to make the first move in dating. Now everybody has that right, and it's time you exercise that! From making mutual friends between you too, secretly conniving with these mutual friends, knowing his schedule of activities and being offered a second date, we've got you covered.

Fear not rejections; expect him to say 'Yes' when you ask him out.

Gone are the days where men held the brakes and always had to make the first move in dating. For so many years, they had the power to start a relationship through courting and phases of getting to know each other. But because time has changed and mindsets are now more liberated and modernized, more girls now are having the guts to ask their crushes out. 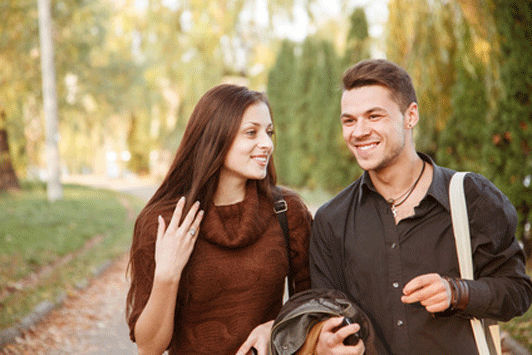 However, there are still some who have absolutely no idea about how to do it and are also afraid of rejection. Here, we teach women how to ask a guy out who happens to be the apple of their eyes.

5 Ways to Ask a Guy out and Get A "Yes!" with Tried and Tested Tactics to for Asking Someone out on a Date for the First Time

While you sit in your room thinking, "How to ask someone out..." what comes to mind are not the thing leading up to getting close enough to ask him out, drawing you closer to him; but instead the bone crushing feeling you would have to face if all your effort were made a farce. He rejected you. That's going to make your chest collapse, right? Now you see it is dire that you concentrate on getting close to him first before asking him out.
You might have been eyeing your crush for quite a while now, but still could not save up the guts to finally come up to them and ask them out on a date.  Even a friendly date could be a bit hard to offer when you are not yet used to it. It is perfectly natural to have inhibitions and being shy around guys in general, especially if you’ve been raised in a conservative home or have been sent to an all-girls school. But then again, like all other things, it seems almost impossible until it’s done. Here, we compiled ways that are all fire-proof yet subtle, perfect for first timers for when you still feel a little shy but would want to try your luck to asking your crush out on your very first date.

Make mutual friends between you two.

It sure sounds cliché, but it is so true that friendship is the best foundation. By doing this, hanging out with him becomes so natural that he wouldn’t suspect you are actually cooking something in your mind. This is a good move because you will become more familiar with each other and belong in the same circle.

When you finally master this tip, everything will fall into place because being friends will naturally let you spend more time with him in less sticky situations. The friendship tactic is highly effective since it lets you know him better without compromising too much. It looks and feels generally harmless, and could only lead to positive results. You will eventually become closer without having to make too much effort, and sparks will gradually fly on their own.

Secretly connive with a mutual friend to tease you two.

It sounds so high school and childish, I know, but this tip really works wonders. Have you heard about the saying “Whatever comes out your mouth comes true because the universe will conspire hearing you say it”? Hearing someone say you guys look perfect together is a surefire way to pique his interest, and see you in a totally different light, this time shifting from platonic to romantic. It could be as casual as your ‘accomplice’ friends saying “Hey, she loves Adam Sandler, too! You would make a cool couple, both movie buffs.” He will surely have you in mind when he has plans to catch the latest movies, and might actually be the one asking you out instead. Sounds great, right?

It doesn’t mean that you got to fake liking stuff you actually hate just because he likes it. In one way or the other, you already have a common denominator. It could be the same school you went to, sports, hobbies, hangouts, or even the food you like to eat. This would make way to having nice, long and actually sensible conversations that will make you learn more about each other. Of course, getting to know each other more will lead to him seeing you differently. He will begin to look at you as a potential romantic interest, so you have to be coy and natural in making it obvious that you are compatible with each other because of the interests you share together.

For all you know, he/she might actually have liked you forever, but just couldn’t express it because you might be giving off the impression that you are already in a relationship with someone else. This is a common mistake most girls unconsciously make. Girls nowadays usually have guy friends that others might misinterpret as romantic rather than platonic. You might not be aware, but it is completely possible that he is holding back from pursuing you because he thinks that you are unfortunately attached already. Be sure that you are obviously single and cliché as it may sound, give off the vibe that you are ready to mingle. It could be through kidding around and making jokes about you not having a date, or being loveless for quite some time now. If he successfully takes on your cue, then your date will soon be set, believe me.

Show up on his/her activities

It could be a basketball game, a theatre play, a favorite band’s concert, or even to her school org’s meeting. The point is to not make it seem like you are following, or even worse, stalking him. Make it look like an accident, or to put it more romantically, serendipity. Not all men are cheesy, of course, but it would show that you are interested, and that you took out a part of time to be with him. You should also keep in mind that a good interaction between you two even before going out on a formal date could be a way to persuade him indirectly to agree when you finally decide to ask him out. It is like subtly telling him/her that you enjoy their company, and from there you can casually ask them out like “Wow! This is so much fun; I would love to do this again.”

What do you do after landing the first date?

Okay, this one is already a follow-up. This is included because after doing the first five tips you got here, the first date is now in your hands.

Be mysterious enough to land a second date

Remember to not divulge too much information on the first date; but that doesn't necessary you should not try to get him to talk. You can do that by knowing which questions to ask on the first date with a guy. Nevertheless, girls, exude some kind of mystery. It would be better to not give off too much information on the first time going out. That way, he will be intrigued and would be eager to know more about you, so the second date surely would not take too long to happen.

What does it take to ask someone out?

Asking someone out could be nerve-wracking for a first timer, girls and boys alike, but the trick here is really just a good deal of self-confidence. It sounds like something you've heard before, but the truth is that when you are confident and only have positive thoughts about yourself and the people around you, you exude a pleasant aura that is contagious.

People could take from your optimism, and for some reason, it will ensure an affirmative reply to whatever you’re pursuing, in this case, asking your crush out.

Now, should you have to wait for him to ask you out?

Can girls ask boys out?

Being a girl should not limit you to being just someone who will endlessly wait until that boy comes up to you to ask you out.

Bottom line on getting a guy to ask you out

Confidence will go a long way definitely, but remember, use it to your advantage.
These tips are just mere guidance to make things easier, but it all roots from your esteem and how you carry yourself. Just remember this; the best way to get a person to like you is to be yourself.
If you still cannot save enough guts to be the one doing the first move and asking him out, why not make him to ask you out?
The bottom line is still confidence in yourself, and an overall positive vibe going on in you.
Good luck!

Posts Related to How to Ask Someone out with 5 Ways to Make Him Say Yes That We Thought You Would Like: Staff Picked Interesting Articles Worth Reading

The last thing you want to happen is miss out on the opportunity to take advantage of the situation when a guy want to ask you out but is scared out of his wits to do it. Here you will find ways to tell he is trying to ask you out. Just keep it a secret because if he ever finds out he’ll be furious. Keep on reading to get what you need to stay one step in front of him.

←Previous 6 Incredibly Stylish Ways to Wear a Beanie to Complete Your Outfit
Healthy Relationship: 17 Ways to Be the Couple That Stays Together Next→