Ways To Tell He Is Scared Stupid To Ask You Out

The guy you like likes you but has been acting like a scared little boy when he is around you. That's because he want to ask you out.

Your guy friend has been acting a little weird lately. Is it because he wants to ask you out but is scared? It is very likely that he is. Isn't that cute. Here we will tackle some of the ways he is reacting to his fear of asking you out.

Here are some reasons he might be a little slow to ask you out. 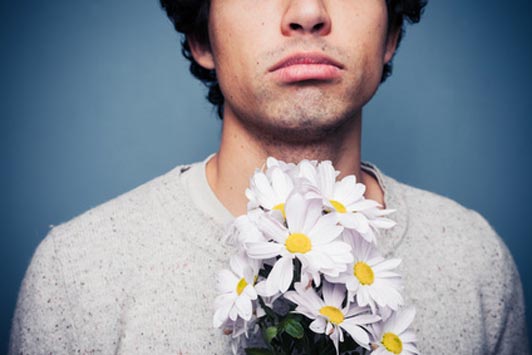 He doesn't want you to think he is creepy

Ever since you first met, things have been working out great. Flirting is showing positive signs but when it gets late he flips.

On the other hand, another possibly is that he is just fishing up the courage to ask you out. To do that he need to find out how to get your number without being creepy-like.

Just ask him if he has a phone.

There, problem solved. He is now one step closer to really asking you out. Let's hope he doesn't blow his circuits by the time that happens.

He still thinks you are out of his league

He is putting you on a pedestal and its preventing him from asking you out.

Sometimes a guy will put off asking you out because he thinks your are way out of his league and trying would be futile, not to mention ruin the trust you had together as friends.

At this point, you need to do something fast to help him realize that there is gravity between you two and all he has to do is get close enough to attract. To do that you are going to need to spend more time with him to make it obvious that going out with you isn't just a dream.

What you may have noticed about him by not is that he always has to get everything right, i.e. he's a perfectionist.

What's worst is that is need to make everything perfect is getting in the way of asking you out. At the surface he may be calm and collective. However, deep down where things fit perfectly into place, in his mind, things don't look so good. It's driving him crazy.

What can you do?

If you want him to succeed, key into his plans. Act as if you are part of a play he wrote, one without lines.

Although it sounds like a lot of trouble, you only have to put on the act until he is done asking you out and you say, yes!

Then, you can bring the chaos.

He won't know what to expect.

He's scared of getting rejected

Not all guys have a perfect batting record when it comes to asking girls out. Maybe he is average or has never been said yes to in his entire life. The reason you are not getting asked out is that he is scared of getting rejected again.

At first you were kind of excited that he doesn't have an ex to compare you with. Lucky!

Then again, that may because he's never gone out with many girls in the first place.

If you think the guy you want to ask you out fits this description, you need to do what it takes to get him to take the leap of faith it takes to ask a girl like you out.

Bottom line: It's coming but you just don't know when...

It takes a guy a long time to work up the courage to ask a girl out, especially if he is so scared he is going to spill hit guts in front of you only to find out he is not worthy. The best thing you can do is let him try. He will get there some day. Have patience.

Posts Related to Ways You Know He Wants To Ask You Out But Is Just Too Scared That We Thought You Would Like: Staff Picked Interesting Articles Worth Reading

Does He Like Me? 20 Easy Ways To Tell He Isn’t Leading You On

You are probably wondering whether or not he likes you or not but don’t want to have to ask. Don’t worry because you don’t have to. There are simple ways you can tell if he is leading you on or just wants to make the moment he confesses the fact that he likes you special. Continue reading for sure signs that he doesn’t just want to be friends and you are safe from the friend zone.

In case you find getting him to ask you out difficult, you should remember that there are some dirty little tips and tricks that will make it seem all natural and that the guys will never even notice. Once you find the answer to the question how to make someone ask you out you will just have to practice what you’ve learned.