Ways To Really Confuse A Guy With Mixed Signals

What is he confused about? Your emotional baggage is slowing down the progress you are making with the guy you like. In other words, you are giving him mixed signals and its throwing him off course.

Playing games with a guy puts a spell on him, sending in into a world of confusion. Mixed signals, whether it be trying to make him feel jealous or simply taking major leaps forward verbally when expressing your feeling while keeping him stuck on first base, send his mind through a maze; And, the worst thing about it is that you don't realize that you are the one throwing him off.

Here are some ways you may be throwing his game off with mixed signals. 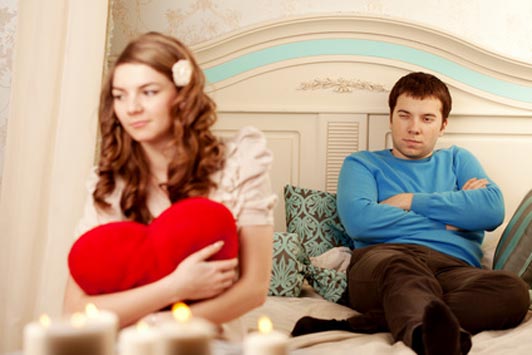 Telling him you still got a thing for another guy

When you tell a guy that you are stuck on another guy but want to move on, he as no other choice but to be confused out of his mind.

When another guy comes in the picture, most guys will wait for you to get over another guy if that's what you are, stuck on some other guy.

If this sounds familiar, you know that you are sending him mixed signals.

My advice, talking about another guy isn't going to get him to like you more.

Getting jealous when he brings up other girls

The only reason you choose to say to him that you had a thing for another guy is that you think that he is always talking about other girls. You even go as for as to asking him, "Are you sleeping with her?" What's worst is that you are not even dating yet. Don't you think it's about time you took a step back?

He's got issues or he may be friend zoning you. Nevertheless, that still doesn't mean you have to get jealous about other girls when you are not even going out.

Trying to make him jealous by talking about other guys too is not going to make things better, but only confuse him with mixed signals.

Being all bark and no bite with his feelings

For guys, translating the words girls say into what they mean touchy feely—like can be an emotional roller coaster ride. That is even though it feels like innocent flirting, you are sending him mixed signals if you are just doing it to tease him.

Saying things that are going to make him think you want too...

He had his tee shirt off for a brief moment and you just happened to see to patch of hair on his chest. Then you walk over to him and be like, that's a little bit sexy.

Then he's like, she's totally into me. Guess what he does next? He get's all confused from the mixed signal you just sent.

If you are going to tease a guy, I suggest leaving out words that are going to throw him off like, sexy; and be all like that's a little bit hairy.

Not making up you mind fast about whether you want to start giving the guy you like hints that you should get together is one way to end up sending him mixed signals. So now may be the time to start asking yourself, Do I really want to send this guy on the right course to date me? If you do, then I advise you to clean up the signals you are sending him. That way there is less confusion for him, leaving him with more time to think about fun things to do together.

Posts Related to How To Send The Guy You Like Mixed Signals To Confuse Him That We Thought You Would Like: Staff Picked Interesting Articles Worth Reading

Getting Mixed Signals from a Guy? How to Read Men’s Minds

Some guys simply give us hard time at the moments. And we are not always quite sure if it is friendzoning or something else. When it seems that everything is right but there is still no good night kiss, not even after three weeks of dating, we simply need to find a way of reading mixed signals. As that is not always easy, we could use little help with mixed signals from guys.

5 Perfect Cute Love Poems to Send Him: Do Not Let Romance Perish

Face it: romance has been severely wounded lately, and pop culture of today is not working very well on recovering it. And poor romantic souls who love cute love poems are in despair. However, we do not have to be at a loss. Were Shakespeare and Sidney writing for nothing? So do not let that happen: embrace your inner romantic and read some of the greatest love poems for him.

Best Dating Advice You Are Ever Going To Get From Reddit

I don’t know about you but when it comes to getting honest to good dating advice there is no better venue than for than than your peers. I never thought I would be saying this but—yes, Reddit. No other other space does it better. If you don’t believe me, try it out yourself. You will be surprised what advice you get. In the mean time, here are some key point to keep you relationship in-check.

4 Clever Tricks to Make Him Jealous: How to Use Jealousy

Some of us love it, and some of us, however; hate it. Regardless of it, the truth is that jealousy can sometimes also be healthy for a relationship, no matter how funny it may sound to you. And if you are ignorant in that area, just like so many of us are, and still wonder how to make your man jealous, and what you can do in that area, we are here to provide you with some interesting answers.