Girls after getting emotionally involved with a guy totally starts believing whatever he says or does. However, a blind trust always ends up in broken heart and dumped feelings. So, it is better to be on a safer side by learning to identify physical signs of lying. If he is sincere enough, then you will be satisfied. However, detecting verbal and body language signs of lying in him can let you see the true side of the real story!

Is he just yet another liar?

Life is full of odd experiences in which you encounter double-faced, hideous people who lie and cheat without being noticed. The situation gets complex when your guy appears as such people. However, you cannot simply accuse him of lying or cheating with you. 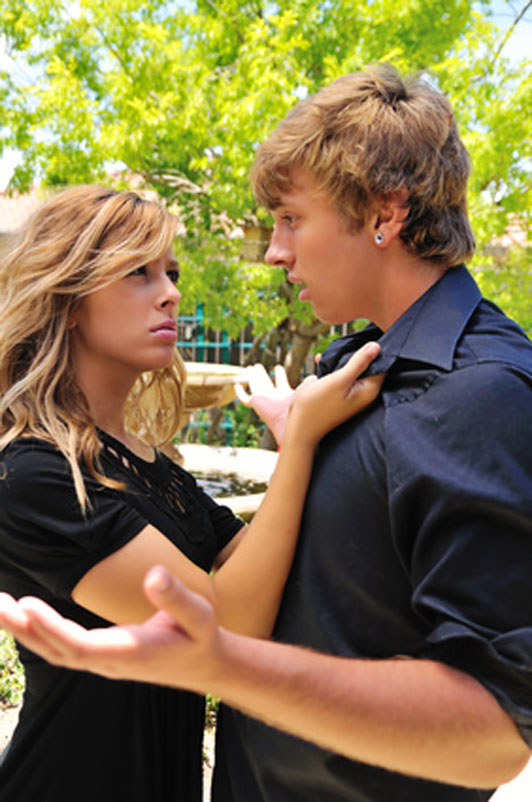 First and foremost, you need to figure out physical signs of lying through his body language and facial expressions, and then you can arrive at a critical decision and judgment.
There are numerous signs of lying which you must learn so that to tell if someone is lying becomes merely a piece of cake for you!

How to Tell If Someone Is Lying to You: 9 Overlooked Signs of Lying Which Makes You Unable to See How Much Is He Serious with You!

Does your guy winks or avoids eye-contact while talking with you? Does he always wear a forced smile? Or is his speech not matching with his gestures! If any of these is happening, or even more, you need to apply a lie-detector on him! Simply check out these pretty obvious, yet unnoticed signs of lying which can tell you what real might be happening between you and him! So, go through these signs for learning tactics of how to tell if someone is lying.

It may sound weirder at first. How lips and eyes are interconnected while judging the credibility of your guy? Actually, it is scientifically proven that our normal talking and eye-senses match 100% i.e. when we cry; tears roll down our cheeks and our lips gets shortened. However, while smiling, lips get wider with sparkling eyes. So, seeing this general criteria, notice the signs of lying eyes in your guy while he does normal talking. Do his eyes remain silent while he laughs? Or he shows excitement in eyes with lips being tightened? Or does he blinks extensively while speaking? Whichever is the case, this odd relation between eyes and lips shows that he is lying!

He will take unexpected pauses while talking

The verbal speech is amongst the prominent signs of lying that can never go unnoticed. If your guy is lying, he will face problem while keeping constant speech i.e. he will take abrupt and sudden pauses and often swallow hard while talking. This inconsistency while talking clearly shows he is wrapping up the truth with a lie!

One of the critical signs someone is lying to you involves odd body language i.e. your guy remains stiff while talking. In normal practice, we move our hands, arms, face etc. while talking. However, when the body language does not go in harmony with the speech, and he stands still, then such rigid posture shows that he is confronting from speaking or showing the truth to you.

A healthy relationship between a girl and her guy is bonded with physical intimacy. But this affection gets lowered when your guy is hiding his feelings or lying with you. In such case, another physical signs of lying will be reflected clearly when he will avoid touching you. Apart from getting close to you, he will avoid your company. Or even being with you, he will not have any sort of physical contact with you. Such physical signs someone is lying clearly gives a wide signal of lying i.e. no physical contact reflects a lie lying deep beneath.

He explains a lot which is not even required

A liar often believes that too much talking and explaining can prevent him from being exposed to the reality. And being a girl we often believe in the long discussions of our guy. However, a long but pointless discussion and talking shows one of the signs someone is lying. To explain irrelevant matter does not show sincerity of oneself. So, while arguing, notice such signs of lying in your guy. Is he repeating stuff or talking unnecessarily? Is he providing too much information which drifts the real discussion away from the actual scenario? In both cases, seeing such talking behavior, you can easily tell if someone is lying.

He will defend himself by accusing you!

This is a clever technique employed by liars which brings froth another signs that a person is lying. As a defensive tool, a liar will always point fingers at the accuser in order to prevent himself from being exposed. Same is the case with your guy if he is lying. During any critical matter’s discussion, if he alters the whole argument by burdening you with the fault, or he balances his faulty image by pointing out your past mistakes, then this clearly allows you to see him as a lying one!

He has a sudden change in voice

One of the most noticeable signs that someone is lying to you revolves around the pitch of the voice of a liar. If your guy is lying, he will show two odd verbal behaviors. Either, he will shout at you and make the situation more tensed. Or, he will barely utter a word to be heard by you. Such shouting or mumbling attitudes while talking makes it easy for you in identifying the signs of lying within your guy.

Normally, queries from your side will make your guy not tensed if he is telling the truth. But what if he is not? Here it is, one of the another signs that someone is lying. When you suspect your guy of some wrong doing, obviously you will ask him to clarify himself. He will mumble, or shout, or simply avoid having eye-contact with you etc. But when you will end the discussion by saying leave it or I am sorry for I suspected you, he will instantly look calmer and takes a sigh of relief. Such body language signs clearly show that he was lying and once you ended the argument, he felt at peace.

He uses humor as a tool to cover up his lies

A funny guy is loved by all girls but what if he uses his funniness to cover up his lies! So, in order to learn how to know if someone is lying while joking is another way to peak into one of the critical signs of lying. In order to check your guy, start inquiring him in a serious tone. If he is sincere, he will normally respond in reasonable tone and explain his sincerity by keeping you calm. On contrary to it, a liar will eventually crack a joke or convert your question or argument into a humorous discussion. So, beware of such attitude.

Posts Related to 9 Signs of Lying That Make It Easier to Tell If He Is a Liar That We Thought You Would Like: Staff Picked Interesting Articles Worth Reading