Home
Girls Talk
8 Signs a Guy Doesn’t like You: How to Tell You Are Stuck as Friends

If you are looking to find ways to know whether a guy is not that into you, then read on and find out all the answers to your questions. This will definitely help you in the long run.

How to tell if a guy doesn’t like you

How to tell if a guy does not like you? Basically, every man needs a ‘type’ of woman and vice versa. Ask your friends as well as other people of what kind of a girl they think you are. After you are done asking people about yourself, start asking what kind of girl he likes from a couple of his friends if you can. 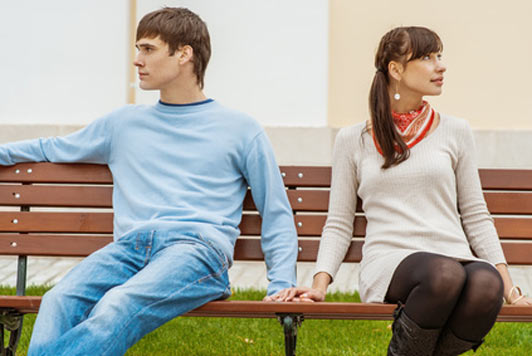 If you are his type and He is yours, then chances are you both will have a great and long lasting relationship in the future. If you are not of his type, then it is just not meant to be. And if you try to change yourself for him, then you’ll end up with a heartbreaking break up. And that is why I’m here to discuss about the signs someone doesn’t like you.
So, how to know if a guy doesn’t like you? Let’s find out below.

He easily tells you about the other girls He is into

This is one of the major signs a guy doesn’t like you. This means He is clearly not interested in you. You’ve got to make sure you don’t complicate this with the random story he tells you about some girl.
Each and every guy does that and so it is not such a big deal. On the other hand, if He is comfortable enough to tell you about every girl He is into, the girls he loves to get hot and heavy with on a regular basis, which basically means, nearly every time you meet, that is for sure a crystal clear sign that he has no interest in you whatsoever. If there were signs he likes you, he really wouldn’t be telling you any of the stories regarding those girls.

He is not really around you

This is also one of the biggest signs which basically means that He is just not interested in you at all. If he has no interest in you, then he won’t be around you either!
When a guy is into a girl, he’ll act in several changed ways. He may not ignore her, he may tease her, he may be irritating, and however, when the day has ended, He is at all times ‘around’ her when He is doing all of this stuff.
If a guy is very much interested in you, at all times he will look for reasons to get closer to you. Constantly you’ll see him gladly popping up in your surroundings. All of this is something that you perhaps didn’t at first realize, but as soon as you notice it, you’ll begin to see it continuously. This is how you tell a guy doesn’t like you or, in other words, isn’t that into you.

So, how do you really know if someone doesn’t like you? Well, this is very easy and simple to notice. If he constantly talks to you in a quite casual voice tone, very similar to how he talks to his pals, then He is possibly not interested in you.
When a guy takes interest in a girl, there’s constantly at least a minor difference in how he talks about you, a difference that shows He is very much interested in you. He has an unusual approach of talking to you and about you, or prolongs some very special sort of devotion, and all this stuff he does it with only you.
Start observing his behavior with others; this is few of the best things you can do! This way, you will judge him regarding his behavior with you.

He doesn’t have the interest to talk to you

This is a very straight forward sign! He is not interested to talk to you and there’s nothing else to it. He won’t ask you out on a date, won’t be around you because he no interest in you.
The important thing here is to not make assumptions automatically that He is not that into you because he has a fear of making the first move, or he takes quite long to answer back to your text messages. Many guys have each and every type of odd habits of texting, but the common, lack of concern for talking to you should be noticed after some weeks or months have passed.
You’ve got to check out if he really has plenty of chances to talk to you/text you, and after that, based on these things, make a decision whether or not he picks to take those chances or merely overlook them.
Lastly, if you are the one talking to him and he constantly seems to be trying to finish the conversation, that is one more bad and clear sign that He is not into you and has no interest in talking to you.

He is got no time for you

I just loathe flaky folks. Even though it happens to me very rarely, when a woman flakes, I absorb two extremely essential things. Firstly, that girl is not interested in you perhaps, and the second thing is that she is not worth your time most probably.
And if a guy is flaky as well as calls off plans and doesn’t at all reschedule, clearly that guy has no interest in you at all. Frankly speaking, if he starts to miss out next two dates, you can, without a doubt, be sure about this. When he misses out one date and if he actually wants to meet you and spend time with you, trust me, he will put all his effort and time to be there with you.

He is friendly with you as well as with everyone else

He flirts with you as well as with everyone else

When you notice a guy is communications with others, it is quite critical in deciding whether or not He is interested in you. If He is flirting with you, you’ve got to look carefully whether he flirts with other women as well. He just might be a flirt and that it is nothing special if he flirts with you too.

If he tries to avoid in making eye contact with you, ends the conversation as soon as he gets the chance, sits away from you, or he normally keeps a distance from you, these are crystal clear signs that He is just not interested in you at all.
If you want to find out if your crush likes you back and if signs above mentioned start appearing, then you should know that he doesn’t like you back. You should use these signs if someone doesn’t like you back as a reference.

Posts Related to 8 Signs a Guy Doesn't like You: How to Tell You Are Stuck as Friends That We Thought You Would Like: Staff Picked Interesting Articles Worth Reading

←Previous Unconditional Love: 6 Key Ingredients for a Long-Lasting Relationship
How Do You Get a Guy to like You? 7 Things to Get Liked by Him Next→