Home
Girls Talk
Does He like You? 8 Signs He Thinks of You as More than a Friend

Does He like You? 8 Signs He Thinks of You as More than a Friend

Women are always wondering whether the guy they like likes them back. Do you know how to tell if your crush likes you? There are some obvious signs that a guy likes you that he cannot hide, no matter how hard he tries.

Just because he never said he liked you, it doesn’t mean that you can’t read the signs he likes you more than a friend. It is common for men to try to hide such things because they think they will make them more vulnerable and they want to know you like them back before they make the first move. 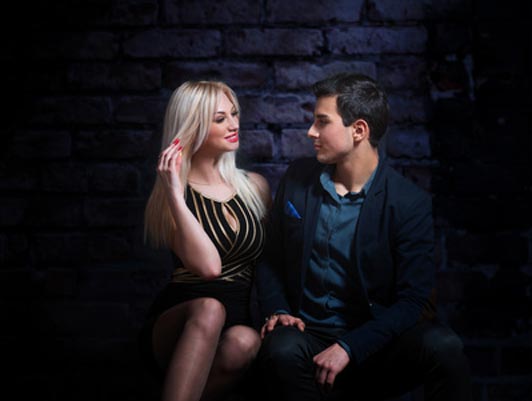 If you really like a guy, you’d give everything just to know how to tell if your crush likes you. The good news is that it’s not rocket science and you can learn the most obvious signs very fast and very easily.

Do you sense some jealousy about him?

As one of the signs he likes you, you might notice that he starts to act strange whenever you talk about a hot guy to him. This is one of the best ways to test him. Just start talking about a random person and say that you like something about them, such as their eyes. If he reacts in an unusual way, you can be sure that you’re on the right track. If he starts talking about a girl or woman he finds cute or nice, you can be sure that he is more interested in you than you would have thought.

Does he look into your eyes?

At this point you may be asking how to tell if he likes you? Think about this: when you’re talking to him, does he look into your eyes and maintain eye contact for longer than usual? If he does, it is a sure sign he’s into you. Most probably he doesn’t keep eye contact on purpose but he simply gets lost in your eyes. As cheesy as this may sound, you can be sure it’s true. You should also check whether his pupils get dilated. This is a certain physical reaction which appears when people see something they like.

He is syncing to your pace

You can find out someone likes you not only from their words but their body language as well. If you take a walk together, you should observe whether he matches his pace to yours. According to scientific evidence, men tend to adopt the pace of the women they are in love with. They don’t do this with female friends and not even with their girlfriend if they’re not really into them. This is something you should check the next time you guys walk together. It is one of the best ways to find out whether or not you have a winner.

Does he make any plans with you?

He put you down for the weekend

Although you might have been friends for quite some time now, there are some signs he likes you more than friends that you should keep an eye out for. For instance, he might talk about festivals or other events and he may wish you to accompany him. Things get even more serious if he actually invites you. The sign gets even stronger if the given event takes place only later on in the year. Making long term plans means that he wants to have you in his life and he’s not planning on letting you go anytime soon.

Is he using his hands?

Having a low-pitched voice

He speaks in in that voice

Did you ever notice he’s voice when he’s talking to you? As one of the signs someone likes you, you may notice that their voice changes when they talk to you. It is common for women to have a high pitched voice, while men have a low pitched voice. You might think that this is only an urban myth, but you should know that there is scientific evidence backing up this theory. Even though it is true that the changes are very subtle and they are difficult to notice, if you listen very closely you will hear notice them.

Are things getting a bit personal?

He is starting to know way too much

As you may know, the majority of men are too self-absorbed to learn things about the people around them, except if they have a special interest in them. If you’re looking for signs a guy likes you more than a friend, you should pay attention to all the things he knows about you. For instance he knows your birthday, he knows where you live, he takes you to your favorite coffee shop or restaurant, and he knows you favorite color and even the car you drive. He knows all these things because he cares; you can be sure that not even your closest friends know this much about you.

Is he getting close to you?

He puts his arms around you

In case you are looking for the most obvious signs a guy likes you, you should be thinking about physical proximity. If he really likes you, he will do things that get him close to you, such as putting his arms around you. At this point he might be doing it as a friend, but you can be sure that there’s more than meets the eyes. The same is true if he move your hair behind your hears; he wishes to eliminate everything that stands between you and him. These are the gestures that you should appreciate about him.
As you can see, finding the signs suggesting he likes you isn’t difficult, but sometimes you have to look really closely or you might miss them – and miss out on him.

Posts Related to Does He like You? 8 Signs He Thinks of You as More than a Friend That We Thought You Would Like: Staff Picked Interesting Articles Worth Reading

←Previous 9 Signs Your Crush Likes You Just as Much as You like Him
What Are Some Healthy Snacks? 9 Snack Foods Guys Love Next→