5 Perfect Cute Love Poems to Send Him: Do Not Let Romance Perish

A conventional “I love you” can sometimes actually be not enough. To avoid your words sounding empty when your heart is not, read through some of the best love poems for him, and gather enough courage to share with him one. Trust us, if he has feelings for you, he will appreciate it.

Cute Love Poem: A Gift from a Depth of a Heart

I have told it to my friends a thousand times before, and I will gladly repeat it once again: I will fall for a guy who can (and wants to) recite Shakespeare’s sonnets. Unfortunately, I’ve only met the guys who have only read a couple of them, and most of them only because it was an assigned reading. 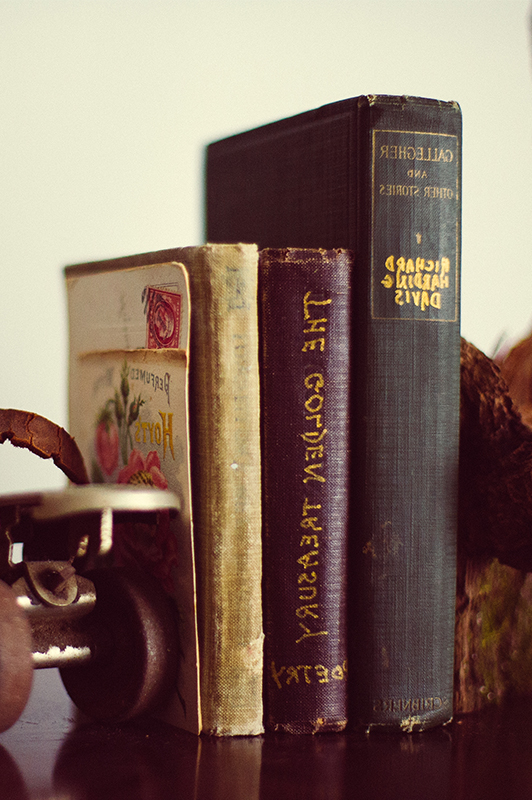 My guess is that guys probably still haven’t realized the impact a sonnet can have on a girl’s heart rate. And not only sonnets. Come on, guys, there are dozens of cute love poems that are already written just waiting on you to learn them by heart (I have just realized that this idiom is quite romantic on its own).

However, as there appears to be a significant lack of romance and love poetry today, us girls could work on improving that area a bit. For starters, we have prepared 5 perfect cute love poems to send him.

Make Romantic Poetry a New Must-Have: Cute Love Poems Are Just a Click Away, so Embrace the Power of Poetry and Read Some of the Best Love Poems for Him

As we have already mentioned Shakespeare, we could also start with him. After all, isn't he The Bard, the master of all the poetry? For those of you who are not that well familiar with his work, apart from a number of plays he wrote, his name also stands behind 154 sonnets which are dedicated to his two greatest loves. Yes, that’s right, two: Fair Youth and Dark Lady, two entirely different personas in every way. Both of them inspired him to write probably the greatest love poems ever. However, revealing who is exactly hidden behind those two poetical nicknames, I’ll leave entirely up to you.

This sonnet Shakespeare dedicated to his Fair Youth, whom he appreciated very much, as they had similar opinions and points of view, they were both great lovers of poetry, and had great understanding for each other. In general, their relationship was full of understanding, and that was not the case with Dark Lady, as Dark Lady drove Bard crazy with passion, and had a lot of conflicts with him, but he loved her nevertheless. However, the one who brought harmony and calamity was the love towards Fair Youth. 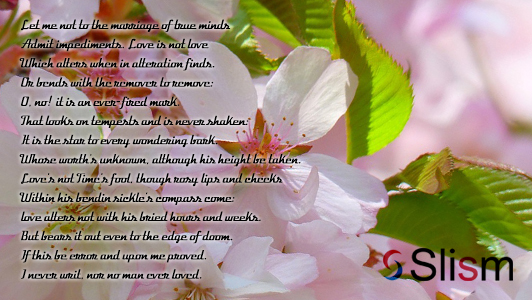 This is not only a cute love poem but also a poem that shows what being truly connected with someone is all about. True love is only the love which doesn’t “alters when it alteration finds.” And when Shakespeare says “the marriage of true minds,” what he talks about is not the actual conventional marriage (Shakespeare himself was never married to Fair Youth), but the kind of relationship one can have only with his soulmate, the one which can survive all the troubles and remain ever strong and lasting.

Every Astrophil needs his own Stella

Yes, by now, you can probably assume that I have a thing Renaissance poets. And you are right. But sometimes I can’t help it. However, what we are talking about here is a Sonnet No 5 (yeah, a sonnet again), the author of which is Sir Philip Sidney. 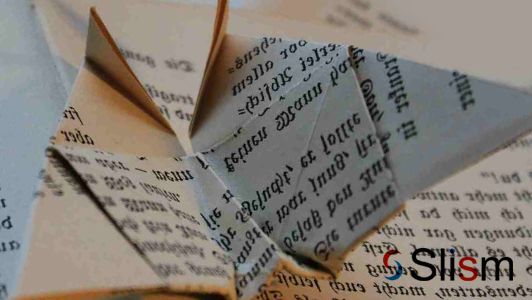 As Sidney was one of the English poets who was very fond of Italian Renaissance poetry, and who looked up to Petrarch with great awe, some of his poems can be said to reflect Petrarch’s work, and they, nevertheless, one of the most romantic love poems. For him, your boyfriend that is, you should be a Stella, and he should be your Stella, too. Love should be sincere, and relationships should be filled with honesty if the things are to work, despite the hardship that follow us along the road.

Do you know how to love him?

Guys can sometimes simply know what we are thinking about them (and we do sometimes actually make it too obvious for them), but those who don’t have enough self-esteem sometimes need a bit of a push, an assurance that will help them see that we do actually care. 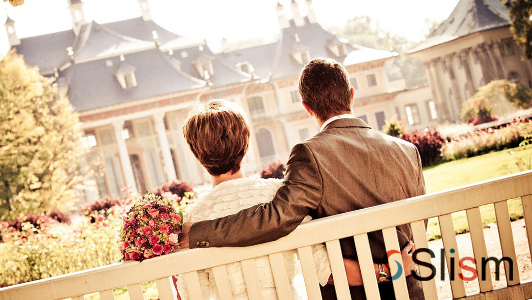 If that’s the case with your boyfriend, the ideal solution is probably not to grab him by shoulders and shake him until you reassure him. But if you are not really good with words when expressing emotions is in question, sending a note with an adequate poem can be a good solution.

Luckily enough for you, you won’t have to write a poem on your own if you don’t want to, because Elizabeth Barrett Browning had already done that for you. And in case that you have been in search of best love poems for him, chances are that Mrs. Browning has already written a couple for you, and one of them is this one: 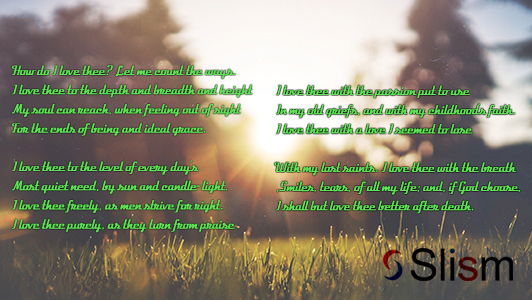 This is heaven, nor am I out of it

A famous line of the playwright Christopher Marlowe is here slightly changed for the purpose of one of cute love poems for him, your sweetheart. The poet W. B. Yeats expressed an adorable, and very touching situation of what one is ready to do when in love. 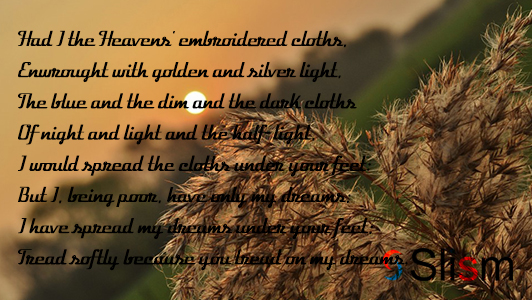 This poem also depicts what the one who is in love actually feels once his or her sweetheart get to know about the emotions that’ve been hidden. Even though those emotions are positive and thrilling, they can be quite prone to being hurt. Nevertheless, a person in love is always willing to give everything he’s got, including the things that can reveal how vulnerable he actually is: his dreams.

Spread the romance. It’s an addiction worth having.

Sending your significant other a cute love poem is something that doesn’t require a special reason. You can do it simply to make his day nicer. Or you can keep that only for special occasions. What is important is that you do not let romance perish. There sure are enough love poems that could fit whatever it is that you want to say, even when you want to be silly and humorous (Don’t trust me? Ask around about Sir John Suckling, you’ll be intrigued). And it case that nothing looks right for the one you love, you can always try writing something on your own. Don’t worry if you have no experience in writing poetry: Greatest love poems for him are the ones that are written from the heart, so says Sidney’s muse.

Posts Related to 5 Perfect Cute Love Poems to Send Him: Do Not Let Romance Perish That We Thought You Would Like: Staff Picked Interesting Articles Worth Reading

Boyfriend Poems: 6 Tips on How to Write Something for Him

Relationships are complicated, and romance fades away quickly, if you don’t do something about it. If your boyfriend doesn’t make the first step, why not be the one who will spice things up? Writing the cutest love poem for your boyfriend just might be the way to go, and here are our winner tips.

Cute love notes seem to be a thing of the past, which only makes them more romantic. Read on to find the cute notes to leave your boyfriend that you like and that he will appreciate. This will only create more sparks between the two of you. Use such small gestures to show him how much you care about him and your relationship.

Write It like You Mean It: 8 Tips for Writing Cute Love Letters

When you pull out a pen and paper (or open a new email message) you might think you know what you want to write, but love letters are a lot more complicated than that. In order to come up with the best love letter for him you will need to know what to say and how to say it to make sure that the words come out right.

We know that love is very important to you, and that the last thing you want is for your words to be misinterpreted, so we have chosen for you some straight forward cute love sayings for him to make your message as transparent as possible. If he loves you, he will know what to do to make you happy.

←Previous Amazing Stay at Home Date Ideas: Top 10 Must-Tries for When No One Is Around
4 Tips for Asking a Guy out: Smooth and with No Embarrassment Next→