Are you worried that you are not getting enough? If so, then lack of vitamin B6 may be slowing down your amino acid metabolism. Here are the foods you need to start eating.

Vitamin B6 rich foods such as garlic, turnip, and fish sources fuel your amino acid metabolism helping metabolize proteins in your diet faster as well as promote health skin turnover preventing rash that occur when you lack vitamin B6 in your diet.

What foods have vitamin B6?

For most people it is a mystery what roles most vitamins and minerals play in contributing to a balanced diet. Getting Vitamin Rich Foods in your body helps you diet the smart way. Foods Rich in Vitamin B6 are no exception. Love them. Hate them. Either way you are going to need them.

Foods with vitamin B6 such as bananas, tuna, and anchovies help you balance your diet eating less. Here is a foods list of the top 10 foods rich in vitamin B6 that you may want to consider adding to your daily eats.

In this diet Slism, you will find a list of health foods rich in vitamin B6 that you can use to boost your intake of vitamin B6 the smart way getting more nutrition in your diet while eating less.

Vitamin B6 plays an important role in the amino acid metabolism.

Foods rich in vitamin B6 help turn protein into energy your body can use as well as promoting healthy skin turnover.

Sources of vitamin B6 include animals, yeast, beans, and grains. Due to the fact that most foods you already eat contain vitamin B6, there is said to be a little chance that you lack vitamin B6 in your diet.

The dietary reference intakes prescribed by the Ministry Of Health, Labour and Welfare (Japan) recommend a vitamin B6 daily allowance of 1.4mg for men and 1.1mg for women.

Note that these daily allowances differ little to that of the US: 1.3mg for men; and 1.7mg for women. Women while breastfeeding should get slightly more vitamin B6 in their diet. If concerned about how much vitamin B6 you should be getting daily, please consult with a physician.

Here we will list the top ten foods containing vitamin B6. The order is according to article 5 in the standard tables of food composition in Japan for vitamin B6 content per 100 grams. The foods appearing in the following list are foods that are easy to incorporate into daily meals. 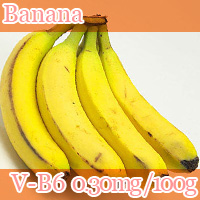 Vitamin B6 is rich in foods like fish. So how do people who can't eat fish get their daily vitamin B6? If you don't eat a lot of fish in your diet, there's still hope for getting enough vitamin B6 in your diet that is eating Bananas, a rich fruit source of vitamin B6.

In addition to the vitamin B6 you get in your diet from food sources such as banana, it is produced by the gut flora living in your digestive tract. On the other hand, for people consuming high amounts of protein in their diet, the amount of vitamin B6 you should eat increases.

In some respects, this is why people taking protein while exercising are recommended to eat bananas. 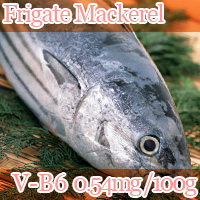 The Frigate Mackerel is a fish not to be confused with the skipjack tuna. It is broken down into different species that can be differentiated quite easily as edible or not.

It is a rich source of vitamin and minerals in addition to being high in protein and fat. While being an excellent source of nutrition for building muscle, protein left over can be metabolized turned into energy your body can use.

Consumption of frigate mackerel should be moderated due to it's the fact that its high in calories mostly attributed by protein. 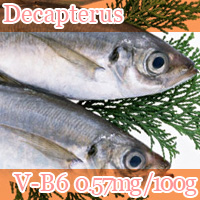 Decapterus is used to make Kusaya,a dish made by dipping horse mackerel in salt water and drying in the sun. Although similar species of fish, it is said to taste very different from the Japanese Jack Mackerel. For people who looking for a less sweet tasting fish the Decapterus may be for you.

In terms of nutrition, the Decapterus is a rich source of vitamins and minerals as well as protein. 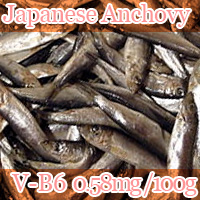 Japanese anchovy are a fish caught in the surrounding waters of Japan. Japanese sardine fry is known as Shirasu. It can be found included in tempura dishes as well as sushi.

Although 1 Japanese anchovy only contains 33 calories, recipes cooking them in oil can turn into a high calorie meal fast.

Cooking Japanese anchovy without using oil is always an option. What you will find is that there are many preparation methods that don't involve using cooking oil such as Japanese Scrambled Eggs with Anchovies. 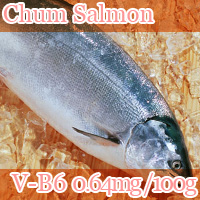 Chum Salmon caught in the fall is also called the autumn salmon and a select autumn seasonal food. It is often cooked with salt. The eggs are removed to make Ikura or Sujiko that can be added to white rice as a side.

For chum salmon with salt added be careful to keep your daily intake of salt in check. 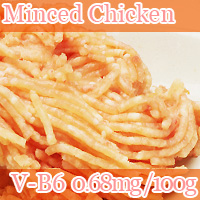 Minced Chicken only contains 166 calories per 100g. Compared to pork and beef, it is still considered low in calories. Made into dumplings and added into a hot pot is one way to eat it. For dieters there may not be a substitute for this animal product. However, minced chicken is high in fat, which is one reason why you should refrain from eating gross amounts of it. 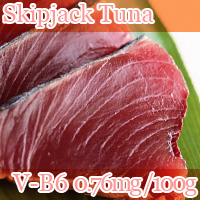 Eating skipjack tuna is said to help lower bad cholesterol as wells as increase the amount of good cholesterol in your body with EPA and DHA adding to your healthy diet. 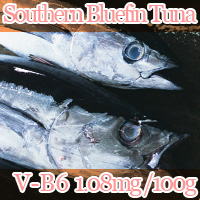 Southern Bluefin Tuna caught in areas of the Indian Ocean is also called the Indian Bluefin Tuna. It is said to contain more fat and flavor than other Bluefin Tuna. It is next in line in line high quality Bluefin tuna only topped by the Pacific Bluefin Tuna. Although mostly found eaten in Japanese-Sashimi, it is a good source of protein. Combining with energy rich carbohydrate foods such as white rice in sushi is recommended. 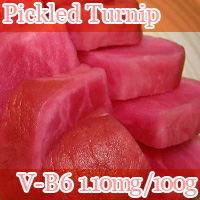 Turnip is one vegetable that can be eaten from the root to leaves. Turnip Leaves although often scrapped away is a good source of nutrition. Used in making many pickled dishes as well as in miso soup, finding a way to use turnip leaves is highly recommended.

Pickled turnip may be a low calorie meal solution but has high salt content that may cause edema if you are not careful. Edema often associated with leg swelling is a condition that hinders circulation in your body slowing down your metabolism. When eating pickled turnip for vitamin B6 watching intake on salt is a must. 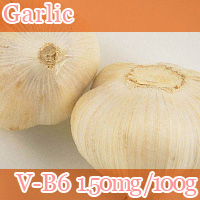 Garlic is known for its strong fragrance and distinguishing flavor. The clove in particular is known to be high in vitamin B6. The part it is known for being a vegetable added to cooking for added flavor, is a substance called Allicin.

Allicin in food is considered to be a pick-up nutrient, just what you need to get through hot summer days out in the sun without hitting a heat stroke.

Garlic Allicin also plays an important role in the activation of vitamin B1 in your body. To balance your diet even more here are some Vitamin B1 Rich Foods that will help you do just that.

A Balanced Diet Is Key! Getting Vitamin B6 the Smart Way

Vitamin B6 also known as pyridoxine is a type of water soluble vitamin that helps support enzymes in your body. It plays an important role in the metabolism of fats, carbohydrates and in particular amino acids.

Recent studies including that done by the University of Hiroshima suggest that vitamin B6 may play an important role in reducing the spread of carcinogenic cells throughout the body and the prevention of bowel cancer.

However, consumption of alcohol blocks the absorption of vitamin B6 by the body. That is why when you are trying to get more vitamin B6 out of your diet, reducing the amount of alcohol you are drinking works.

Too Much… Vitamin B6?

In the case when you lack vitamin B6 getting vitamin B6 rich foods in your body fast is the best way to prevent malnutrition.

Posts Related to Vitamin B6 Rich Foods To Speed Up Your Amino Acid Metabolism That We Thought You Would Like: Staff Picked Interesting Articles Worth Reading

Foods rich in vitamin C, B vitamins and vitamin K are what healthy eating with vitamin rich foods is all about. Eat less eating healthy for weight loss that works.

Vitamin D rich foods list telling you what foods have vitamin D so you can do more with your diet getting optimal calcium absorption in your daily eats.

Vitamin A foods list for natural sources of vitamin A along with tips on how to keep your body from running out with beta carotene. Vitamin A in your diet.

Soybeans, peanuts, and wheat germ help you burn carbs and are rich in vitamin B1 that can keep you from suffering from the side effects of not getting enough vitamin B1.

Foods High In Folic Acid and Vitamin B9 Supplement Facts

Your mother was right about eating broccoli. Foods high in folate aren’t as hard to come by as you would think. Eat spinach and edamame to get your folic acid.