For sure you have been in the situation when you really liked a guy and you were looking for the best ways to impress a guy without seeming desperate. One of the questions that the majority of women have is how to dress to impress.

If you come to think of it, basically there are two kinds of women: those attractive to men and those who impress them. While this may come to you naturally, it is possible that you are asking yourself how to impress a guy? 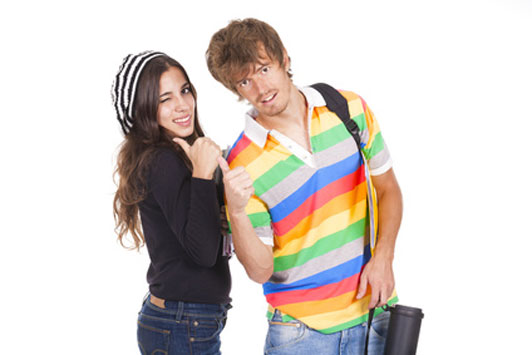 Well, first of all, impressing a guy isn’t rocket science. If you do it right, you will find the answer to the question how to get a boyfriend.
In case he is impressed by you, you can be sure that he will call you the next day and it won’t be long before you have your second date. Just make sure to remember the best ways to impress a guy.

Are you looking to leave a lasting impression on him? You are in luck! Here are the basic ways to impress a guy without fail. Dive into how to impress a boy, man, or any guy. The sky's the limit and guys are falling.

If you would like to know how to impress a guy on a date, the first thing you have to keep in mind is that you are a woman. This means that you are supposed to have emotions. However, there is no need to burst in tears every time he tells you a sad story. Instead, you should work on your emotional IQ. Having a high emotional IQ helps you say all the right things at all the right times. When asking how can I impress a guy, it all starts with knowing what to say when he tells you he had a bad day.

What to wear to impress a guy

One of the most important questions that women ask themselves regarding their dates is how to dress to impress a guy. Although you may have heard this a million times before, it is a good idea to show some skin on your date. Naturally you should be thinking about something tasteful, yet sexy. For example, you could go for a little black dress with a nice yet not too revealing cleavage. For some reason men are obsessed with women’s chest. This doesn’t mean they are superficial; they are simply men.

Some men are impress when you get the bill. Go figure.

There are many different ways to impress a guy and one of them is to get the bill at the restaurant. Although this isn’t something that you should do on the first date, it is nice for men to have someone else get the bill for a change. When asking how do I impress a guy you should know that this will show him that you are generous and it shows that you have a lot of confidence too. Also, it is nice to know that you don’t need him to pay all the time. However, because he will be strongly impressed, most probably he will pay most of the time.

It’s in your smile

Although you may not believe it, the best way to impress a guy is to be smiling. If you are thinking about how to impress a guy at work, this is something you will have to be thinking about. Naturally, it shouldn’t be just any smile. It has to look genuine and sweet. In order to avoid awkward situations, you should make sure that the remains of the parsley and sesame seed salad you had for lunch aren’t still “clinging” to your smile. Also remember not to force it so that he won’t think you’re some kind of freak.

Guys don't like it when girls agree on everything they say. Girl who are 'clingy' rise to the occasion to agree. Point: Don't be that girl. Agree to disagree.

Women are often wondering what to say to impress a guy. Some may be tempted to agree with him in everything he says so that he will like them. In the end the guy may have the impression that the woman in question doesn’t have an opinion. This is why it is best to disagree when you feel the need without being disagreeable. One of the tips to impress a guy is to say out loud when you don’t disagree, but wrap it up nicely. It will be fascinating for him to meet someone who sees the world differently than him.

You may think that men don’t care about such details, but you should know that hair is one of the things about women that men are fascinated with. If you are asking how to dress to impress guys, you should wear a dress that leaves your neck uncovered and let your hair loose. It is important for your hair to look soft and to look as if it had a nice smell. The women wondering about what to do to impress a guy should remember to play a bit with her hair. For some reason this seems really appealing to men.

Have a hobby and talk about it

What guy wouldn't be impressed with a independent woman who's got her own… hobbies?

In case you are wondering how to impress a guy on a first date, put hobbies on your list of things to talk about. They might not realize it but men are bored of talking about their job and listening to other people talking about their jobs. It is nice to hear someone talk about something else for a change and you get bonus points for being able to share information regarding your hobby. If you would like to know how do you impress a guy, you can be sure that you are on the right path. This way he will be more likely to share his hobby as well.

Someday he'll find out that you are smarter than him. Someday. Or you are one of those people who think there's no time to calculate-pi, just show him already. Eventually, someone will get you.

There are some people saying that men don’t like smart women. The truth you have to know when it comes to how to impress a man on a first date is that only not-so-smart men don’t like smart women. The knowledgeable women who know that they are smart and don’t feel a need to impress are really impressive. This means that if you are asking how to find a boyfriend, you will have to show off your brains. If he feels threatened by you, you can be sure that you weren’t meant to be together… ever.

Is impressing a guy with clothes overrated?

You may be asking how to impress a guy with clothes, but remember that your personality is the most impressive aspect about you from a guy’s point of view.

Posts Related to 8 Simple Ways to Impress a Guy and Leave a Lasting Impression That We Thought You Would Like: Staff Picked Interesting Articles Worth Reading

How to Take Pictures that Will Leave Lasting Memories for Everyone

Not only professionals need to know how to take great pictures. For sure you want to have nice memories as well and photos are an important part of them. To make your job easier, we have compiled a list of tips that you could use to to improve your skills and improve the photos you take. Just read on!

Positive Body Language: How to Make a Good First Impression

Practicing in front of a mirror is not a way of practicing Charisma with your Sim. It can actually help you in real life and increase your chances of making a good first impression. You can even print out this article, stick it to your mirror and have a look at it whenever you ask yourself: How to make a good first impression on that guy? Or during that interview? Or in any other situation.

7+ Simple Things to Tottally Take Control of Your Life

Every now and then, there are moments when you feel like you are loosing control over your life, and you are merely a passive viewer in a show. That is why there occurs a need for you to take your life back. That is when you start thinking about getting what you want from life and make it suit your needs. Go for it: Make a change in order to take back the control of your life.c