Read up on some of the interesting and fun questions to ask a guy and get closer to him in the process. From learning about his favorite book to making zombie apocalypse plans, these questions are sure to cheer you and him up.

Quirky, funny Questions to ask a guy sure to amuse him

Getting to know your significant other can be a lot of fun, even more so if you spend some time to talk about things that aren't serious. A bit of levity can go a long way towards building a relationship based on communication, and these 22 fun questions to ask a guy will give you a nice groundwork towards figuring out what he likes and what is he into. A lazy summer afternoon, a date at the local cafe, over breakfast - these light-hearted topics are suited for any situation and can make both you and him grin quite a lot. Try offering your own answers after hearing his; you may surprise him with some of them. 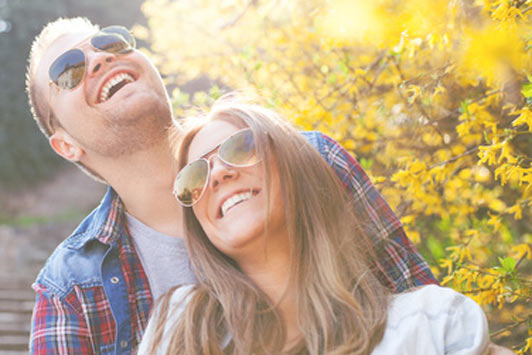 One word of advice - don't over-think the answers you get for these random questions to ask a guy - these are not serious subjects that you should judge him by. You shouldn't over-think your own answers either, as sincerity is the key and what makes these so interesting. Just be yourself, and let him be himself, that's how you get to truly know about someone.

What are funny questions to ask a guy? Here are 22 that are sure to amuse him and more.

Which animal do you think is your spirit animal?

Mankind has always sought out a connection with a specific animal that would represent them. Nations have chosen animals to be their flag posts, and shamans of various cultures have been trying to enhance an inherent virtue, power or a characteristic of an animal. Ask him what his spirit animal would be? A sly fox, maybe? A playful bear cub? You can get his general view of himself from this. Naturally, after this question, you can ask him the second one -

Which animal do you think is my spirit animal?

- See which animal does he think represents you the best.

What is your dream job?

Chocolate tester? A writer? Someone who gets paid for playing games? There are plenty of fun jobs out there, and if you can't name one immediately - make one up!

Where would you travel to if you could pick any place on the planet?

Need more funny questions to ask guys? Don't worry because there is more. Almost halfway there!

If you could move for free, where would you move?

Does he like or dislike a specific country? Where does he think would be a fun place to live? Cold northern countries, or maybe tropical paradise? It's a fun topic to explore, and you can even make some travel plans along with this light topic. Now, if you want to make this topic a bit more exotic, you can always ask

Out of all Solar System planets, which one would you like to visit most?

Now, that's an interesting theme. Red Mars, where so many speculate about existence of alien structures? Or maybe something a bit more romantic, like Saturn with its magnificent rings. Space travel may not be a thing yet, but it might be, some day in the future.

What would be the most exotic date you could think of?

While you're on the subject of exotic destinations to visit, you might want to spice things up a bit with romantic undertones. Who says fun questions to ask guys can't get you a very fun date? See what would be his most interesting and exotic date idea, and you might turn those ideas into reality as best as you can.

Most of us associate music with events or people. Get him to tell you which song goes through his head when he thinks of you.

Out of all the world's languages, which one sounds funniest to you?

Being bilingual is plenty of fun, knowing a language other than your own can score you unexpected friends. Find out which language would he study, given a chance.

Do you know Klingon language?

That was random! If you haven't asked you boyfriend already, do so right away. Boyfriends love them.

Would you study Elven language?

These two questions will show you just how nerdy he is. The make-up warrior language from Star Trek and Tolkien's Elven languages are actually not dead languages; there are people who are fluent in them. Talking about them and even researching them a bit may be tons of fun.

If you could take one book to a desert island, which book would that be?

Cliches are cliches for a reason - coax his favorite book from him with this fun question and see if you can find a book you can both read several times without getting bored of it.

What is your favorite childhood toy?

Who is your favorite movie/comic/cartoon character, and what makes him your role model?

Novels, books, movies, comics, it doesn't matter, we've all been introduced to fictional characters and we all found at least one to our liking. Share your favorite character and listen about his.

If you could pick a super hero power, which would you pick?

Power of flight or invisibility?

With all the latest super hero movies from Marvel and DC studios, it's a given that we've all been introduced to various super humans with awesome powers. Which of these would he like to have? Also, flight or invisibility powers offer so many ways to have fun, you can discuss some of them with him. Of course, these nerdy topics might require some research, but it’s surely worth the fun.

If you could shape shift, which shape would you try to take?

Some sort of animal, a large beast? A hunkering form, like that of The Hulk? A Godzilla, maybe? There are so many choices here, see which would he prefer? And while you're there -

Would you try to change your gender with your shape shifting power?

There's a saucy topic for both you and him, the answer is sure to be good.

What is the first thing you'd do if you heard about the outbreak of zombie apocalypse?

There have been many movies, comics and books lately about zombie apocalypse or similar scenarios. What has he learned from them? Would he run to find a secluded shelter first? Rush to the mall to stack up on water and food? Run to get the weapons? Imagination is fun thing to play with, so this question can be discussed at length.

Where would we meet in case of a zombie apocalypse?

Romance first! Would the place you first met be a safe spot to meet in case of a zombie outbreak? Most likely not, so you better discuss where to meet up once the zombies start swarming.

Which weapon would you pick for your zombie apocalypse survival?

If you could jump-start a zombie outbreak - knowing you'd survive - would you?

These zombie questions really do reveal something. Imagining him all manly fighting around to save others and his life, you can simply feel your cheeks blushing. But would he really do that? Maybe he would just back away, not thinking about helping anyone else. These questions will show you how would he behave in a rough situation.

Posts Related to 22 Funny Questions to Ask a Guy That Is Your Boyfriend to Learn of Him That We Thought You Would Like: Staff Picked Interesting Articles Worth Reading

These are some great questions that you can formulate when preparing for a date. You can even think about these great first date questions when you are actually on the date but make sure you don’t seem too rehearsed

←Previous Getting Mixed Signals from a Guy? How to Read Men's Minds
Boyfriend Surprises: 8 Things You Can Do to Surprise Him Next→