Being in a physically or verbally abusive relationship will not do any good for you so you have to make sure you get out as soon as you realize that there is a problem. This is what we will help you with.

Can You See the Signs of an Abusive Man?

While some people might think that it is hard to miss the signs of abusive relationship, the truth is that they can be so subtle that women don’t even notice them. Abuse doesn’t only mean being hit or shoved, but it also means being called degrading names. In order to see the signs of a bad relationship, first you should know what you should be looking for. Look for any signs that you don’t like or that hurt you in any way – that could mean abuse. Read on to find out more about these early signs and to know when you should get out of the relationship. 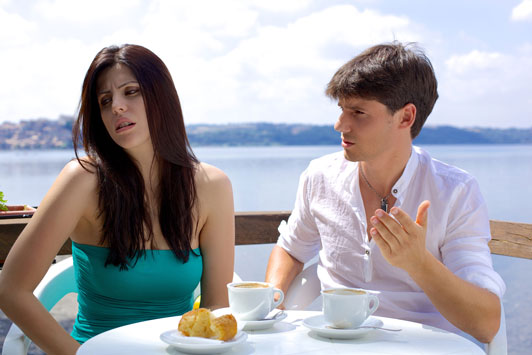 Humiliation can be the most subtle form of relationship abuse. It starts with signs you don’t even notice and before you know it, all you friends will be talking about you. As difficult as it may be to notice, you should make sure not to dismiss any of the warning signs.

2. He always puts you down

Being a victim of verbal abuse can degrade your self-image. It goes hand in hand with verbal abuse. Even if he isn’t yelling at you, he uses a language that makes you feel worthless and reliant on him. He may or may not do this on purpose.

3. He is very judgmental

Does he ever say that you are this or you are that? Do you hear him say things like you are too sentimental even though you think you reacted in a normal way? It is possible that you are a victim of emotional bullying and you should seek some help.

Most abusers can’t make themselves be understood by the world around them simply because there is no way for community to understand these people. They live by other norms and so they can’t communicate effectively or efficiently.

5. He ignores your needs

Does he care about what you want or what you need? If he always dismisses them, you can be sure that you are in a toxic relationship. A partner who loves you and cares for you will always do his best to care for your needs and to fulfill all your desires.

If he is controlling, his main purpose will be to alienate you from all people in your life, so that he will be the only one left you can turn to. This will give him more power over you and he will be able to make all kinds of decisions for you.

So, how can you know you are in an abusive relationship? Keep an eye out for the following relationship signs to gain some insight.

1. He humiliates you – in private and in public

At the beginning you might not even know that you are with one of the emotionally abusive men. There might be some subtle jabs that you quickly dismiss. However, before you know it they will turn into yelling and being embarrassed in public. The men of this type will get upset and angry for no reason and they will make you believe that it is all your fault. This kind of humiliation has as its purpose to make you submissive to his will. Your partner will do his best to control you in public as well if he knows that through this kind of behavior he will make you submissive to his wants.

Don’t let yourself believe that there is anything you could do to change him or that with time things will get better. These are just excuses you make up for him. The truth is that abusive relationships don’t really change and this is especially because men get what they want and so they would be fools to change anything. It is you who has to make a change for the better that doesn’t include him.

2. He always puts you down even though you didn’t do anything wrong

You can know you are faced with relationship abuse if your partner loses his cool frequently during arguments and he turns to name calling or foul language. He may often put you down through verbal abuse. This may include insulting your intelligence and looks and it is meant to make you feel worthless. Although it is common for abusers to use foul language, it might be enough for them to use attributives to ruin your self-esteem. Verbal abuse in a relationship is meant to make more reliant and more compliant towards your partner and only him. As a result he will have more power and control over you.

In some cases you may not know that you are the victim of emotional bullying, but you may notice that you always feel bad after talking to him. This is a sure sign that there is something wrong, because you are supposed to feel stronger and get a self-esteem boost after you talk to your partner. You deserve to be with someone who appreciates you.

3. He is very judgmental – you are never good enough

In a toxic relationship you will always feel like you aren’t good enough. He may criticize everything you do or the way you look. He will make mountains out of molehills and he will never praise you. Just like the other forms of abuse, this kind of behavior is meant to make you feel worthless and dependent on him, as if you weren’t able to do things on your own and nobody else would be able to love you but him. This way he can make sure that you will never leave him because you aren’t strong enough or you don’t have the courage.

If you have a verbally abusive relationship, your partner will pray on your weaknesses and he will hit you where it hurts the most. These people can simply sniff out the weak points of women. There is nothing you could do about it but stand up to him and tell him you won’t take it anymore. This should be the last thing you tell him before you walk out the door.

4. He doesn't communicate effectively and it’s still your fault

Do you feel like sometimes he doesn’t even know what he wants, but when he doesn’t get what he wanted, it’s still your fault? In such cases it is common to see the effects of emotional abuse. He might be outraged if you don’t understand him, but he can’t put matters in a way for you (or anyone else) to understand. It’s not necessarily that he can’t communicate, he only can’t communicate with you in a way for it to be efficient. It is just normal that you won’t be able to fulfill his needs and you can already know that he will get upset, which will only make things worse. There is no point in telling him that he wasn’t clear; whatever you say, it will always be your fault.

When it comes to communication problems, an abusive boyfriend is very difficult to handle. The truth is that you can’t really talk to him or give him feed-back as he will always see it as an attack or an insult. You shouldn’t even waste your time – things will never work out for the two of you.

5. He ignores your needs – even the basic ones 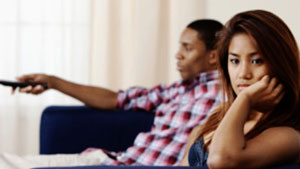 Do you know how in movies men always take care of their partners and they do everything they can to fulfill all their dreams? It might not be the case for you. It is one of the signs of an abusive man if he doesn’t seem to care about your needs, not even the most basic ones. You may say that you need something and he will simply dismiss it. The same goes for your emotional needs. You may think that he is just detached when in reality it is one of the signs of relationship abuse for him to only care about himself.

6. He is controlling of everything in your life

As one of the signs of abusive men, he will try to alienate you of everyone in your life so that you will be able to turn only to him. The point of this is for the other people around you not to notice that you are a victim of dating abuse and they won’t be able to help you. The majority of these men want their partners to be dependent of them and nobody else. You might think that he is caring and invested in what you do and the decisions you make, but slowly he will take over your life until there is nothing left for you to control. These changes may happen gradually so that you don’t even notice them.

Posts Related to 6 Early Signs of Abusive Relationship Potentially Harmful to Your Health That We Thought You Would Like: Staff Picked Interesting Articles Worth Reading

6 Common Signs of Verbal Abuse You Should Look Out for

In the moment you see the first signs of verbal and emotional abuse in a relationship, you should make sure it doesn’t go on. It will become toxic and before you know it, it will be too late to make a change. Try to discuss the problem with your partner and if there is nothing to be done, simply give the relationship up.