Obsessive compulsive personality is confusing because the symptoms are present in many of us. The line that divides the symptoms from someone suffering from obsessive disorders is the degree that it negatively affects their life.

It can be hard not to obsess about something we really desire but can't have. While obsession is a turnoff for most guys, obsessive compulsive personalities are a nightmare for anyone. Obsessive compulsive personality types are the people that are always hours late because they can't decide what to wear. Their hands are never clean no matter how many times they washed them that day. It's no surprise that they have little free time that they don't spend obsessing about the smallest thing. It is crippling mental condition that is difficult to live with if you have it, or if you have a friend that has it. 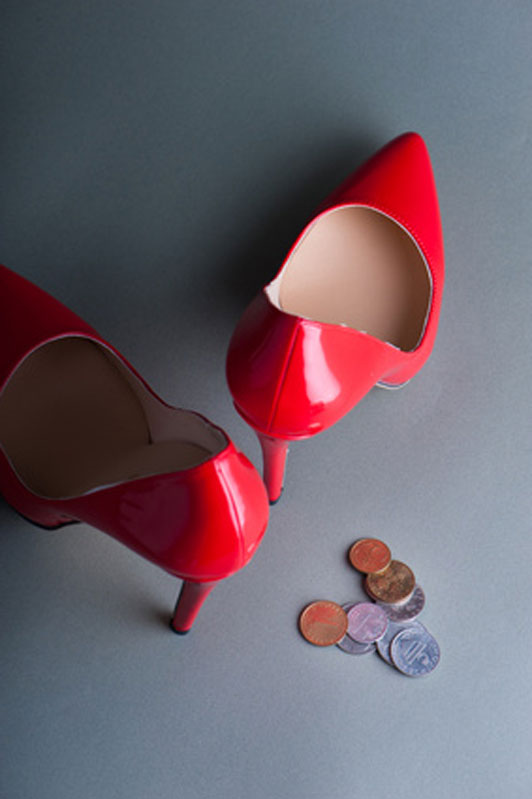 People with obsessive compulsive personality often can’t make the right choices for themselves in the long-term. The instant gratification factor in their minds is too strong to resist.

They often suffer from more extreme anxiety than the average person, because they cannot stop obsessing about that minor mistake or thing they forgot at home that day.

Perfectionist describes the obsessive behavior of this type of person. Perfectionist sounds like a good thing at first listen, but the consequences of being a perfectionist means sometimes neglecting important aspects of your life.

Thinking about destructive negative thoughts over and over again. It is the trademark obsessive compulsive behavior to develop paranoia over the slightest of circumstances.

They are very self-conscious individuals. If they don’t look perfect, feel perfect, they stay at home. Their appearance triggers a lot of anxiety in themselves.

There's a vague line separating those with normal obsession and paranoia compared to someone with an obsessive personality disorder. All people have these kind of traits to an extent, and we've experienced many of these scenarios some time in our lives. These are common personality traits. But the occurrence rate at which these obsessive thoughts occur depends on the individual. It's time to seek help when you cannot function properly. Some people are obsessive to a bizarre extent: to the point where they are a slave to their own impulses. To be an independent adult we need some amount of self-restraint. We need the control of our lives to be able to make decisions that aren't impulsive all the time.

How do you know if you have an obsessive compulsive personality? There are five clear signs to be able to know if someone suffers from this debilitating mental condition.

1. Obsessive Compulsive Personality Disorder: Not an Ounce of Self-Restraint

An obsessive compulsive personality will often have trouble making the decisions that end up benefitting them in the long term, and instead opt for instant gratification almost every time. Why worry about the consequences later when we've got something good right in front of us now? A good philosophy to have sometimes, but compulsive people show little self-restraint always. This is why giving an obsessive personality a credit card almost always ends in disaster. Debt is the worst enemy of these types, because they just can't help but splurge whenever they see an opportunity. Someone with obsessive compulsive personality disorder can easily rack up thousands of dollars of debt in a very short amount of time. You may think all us girls have trouble when presented with money and a fashionable shopping mall, but it's nowhere near as bad as someone with ocpd. Just think of the worst impulse you've ever had in your life and multiply that by ten, and you've got the regular working mind of an obsessive personality.

People with obsessive compulsive behavior carry more stress with them than the average person. The stress mostly comes from overthinking everything. Their tendency to think things through to the very last detail gives them little time to take action. They are caught up in their thoughts so it is more difficult for them to react to given situations. You would think that someone who thinks a lot would be smarter, which is usually the case. But what good is smarts if you spend more time thinking than doing? This is the inherent problem of a compulsive personality. They act on whims, but are often held back by their thoughts to make the right rational decision. They also have many unwanted thoughts, which leads to paranoia. They question themselves, others, and life in general. Life can be scary for those with compulsive behavior disorder.

If you know someone obsessive compulsive, you would know that they aren't satisfied with "just enough". Everything needs to be perfect, or they cannot rest. An obsessive personality will ruminate about something insignificant until they can make it to their standards. On the bright side, obsessive compulsive people make an excellent addition to a workforce that strives for perfection. On the downside, it is extremely inefficient and those with this obsessive compulsive personality are unable to prioritize their time effectively. Thus they spend excessive amounts of time focusing on one aspect of their life while the rest falls to the waist-side. This has the effect of sometimes alienating family and friends, or forgetting about hygiene, or anything that most normal people are able to multitask with. Multiple tasks at the same time is an obsessive compulsive's worst nightmare.

People with obsessive personality disorder always have something on their mind. Whether it's that they can't remember if they locked the front door in the morning, or when the last time they washed their hands was, their rumination never stops. They are a prisoner inside their own minds, where their obsessive thoughts produce more obsessive thoughts. It's no wonder they carry so much anxiety around with them when their mind is in constant overdrive. People with this personality type tend to either be living in the present or the past. They rarely, if ever, enjoy the present moment because their mind is on other things. This is also why they commonly forget important dates and commitments. Their short-term memory is sketchy because their worrying knows no bounds.

A person with an obsessive personality type will fixate on abnormal or unattractive qualities about themselves to the point of mental exhaustion. They are concerned about their appearance more than the average person. For a girl this will sometimes mean hours of mental preparation and cosmetics before walking out of her home. It's obsessive to the point where every little detail has to be perfect before even thinking about a social situation. This is a huge drain of effort and resources in their lives. Think about all the hours that add up from having to perfect the same look day in and day out. Obsessive behavior that is this ingrained is difficult to remove in someone with obsessive disorders.

Being self-conscious to the point of obsession will leave a person always nervous that something is wrong with her hair or eyelashes. Every detail has to be perfect at all times or she can't be seen in public. Everyone is self-conscious to some extent. But when it controls your life in the same way as an obsessive compulsive, the signs should signal you to get help.

Posts Related to Obsessive Compulsive Personality Disorder: Perfectionist Syndrome That We Thought You Would Like: Staff Picked Interesting Articles Worth Reading

Borderline personality types are known as “emotional roller-coasters”. If you are unsure as to what that means, then these 6 traits will clear up everything. All of the flakiness and unpredictable emotional outbursts are commonplace for someone with borderline personality. Now your friend’s or boyfriend’s behavior will start to make sense.

We live in a stressful world. We are being judged at every corner and things outside of our control are causing us mental distress. But fear not! General anxiety disorder is a mental condition that can be fixed. Whether you have the occasional anxiety or just full-on panic attacks, there are simple and effective measures to manage your condition.

What Is Bulimia Nervosa? Help For Compulsive Overeating

Stop binge eating and compulsive overeating ruining your diet. Diagnose bulimia nervosa before it’s too late. Steps to get treated right away.

Compulsive overeating is a recurring issue in the diet scene. Everyone wants to know how to stop compulsive eating to take their diet to the next level.

Which Type Are You? The Four Personality Types Explained

Are you a natural born caregiver? Do you think about how you can make the world a better place? Do you only believe in the things you see for yourself? Is creative problem-solving your strength? Find out about the four personality types and which one best describes you. You might learn something new about yourself. Talk about them with your friends and find out what their personality types are too!

←Previous 7 Foods for Healthy Hair: You Can Look Healthier by Eating Right
Save Money on Groceries: 8 Grocery Secrets to Spend Less on Food Next→