Home
Girls Talk
How to Wink Seductively: Secure the Man You Have Eyes On

How to Wink Seductively: Secure the Man You Have Eyes On

Seducing the man you have your eyes on is not easy. One of the best techniques for that is certainly eye winking with lots of seduction, which always works. Still, like any other skill, it needs to be mastered and practiced, before it can be used properly.

Seducing a guy may seem like a simple thing to do, a piece of cake for any girl, while it's so much more. In order to get guy's attention, women must master the techniques of complex body language and seduction, starting from a very well known eye-winking. There are a lot of pieces of advice on how to practice that as well as many tips on how to be sexier that you can check out and work on your own plan on how to seduce the man you're interested in. 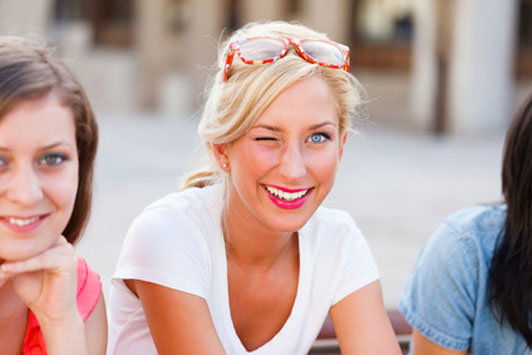 1. Practice in the mirror

Every skill needs to be practices until you get it done the way you want to and winking is no different. Have patience and work on your winking.

2. Do the eye that feels more comfortable

Don't force one side of your face just because you think it will look more seductive. Instead, try winking with both eyes, one at the time and find out which feels more natural.

3. Be careful of squinting

When practicing, try to keep the other eye wide open, so you wouldn't get the squinting effect. Otherwise you'll look like you're about to sneeze.

Arrange a practice on your best friend and have her/him come over at your place. You'll laugh your selves out, but you'll get important feedback on your looks.

5. Do it slowly and seductively

Winking is supposed to be done slowly, and not like you got something in your eye and you're trying to get it out. Relax and try doing it as slow as you can.

Don't hesitate while blinking, just do it. Your confidence shows when you wink at someone with no hesitation, because you have practiced and had it work on other people.

A mysterious and seductive woman knows just how to draw man's attention and occupy his mind for a long time. Sometimes it starts with a small talk in a very private circle of friends, and at times, a great looking woman manages to catch the guy's attention with only one thing- her eye winking trick.

1. Practice in the mirror: how else are you going to get good?

Not all things we do come naturally. Most of them do, but what is with those skills we need to discover, at first, and then use them afterwards? They need to be clarified and then practiced until they look as naturally as the others do. That is why a practice is one of the best things, especially when it comes to working on your sexy wink. First, find the explanation and simply follow the given instructions from the internet on how to wink with your eyes. Try both eyes at the same time, then slowly practice one eye at the time to get the desired result. Of course, don't forget to do all of the mentioned in front of the mirror, because that way, you will have a lot better feedback on what you are exactly doing. It is all about getting the right feeling when you are winking, but also getting the idea how you look like while you are winking at someone. Luckily, that someone is going to be you, at least until you perfect this technique to the level you want it to be.

2. Do the eye that feels more comfortable: do what works best

While getting yourself preoccupied with working on this specific skill, try and think about the fact what eye wink feels more comfortable and more natural from the beginning on- left or right. That will ease your work a bit, because working your special skill on the eye that feels more comfortable, only means that mastering this skill won't take as long as it would on the other eye. Don't try and forcing this technique on the eye you don't feel comfortable with, just because you believe that it's going to look better. The simple truth is, it's going to look amazing when you bring it to perfection, no matter what eye you are doing it with. As soon as you master this, there are other things you need to work on, but after you're done, guys won't even be looking at winking any more. Also, do this in front of the mirror, because you can practice the head position as well as you are doing your winking. That will make one killer combo, regardless of the side of your face.

3. Be careful of squinting: control your squint

Remember the movie "If the Shoe Fits" from the 90s, with famous actress Jennifer Grey in the main role of a modern version of Cinderella and the part where she is trying to be all seductive and mysterious in order to pick up a guy? As she was trying out her new contact lenses and got rid of her glasses, she thought she was stunning and jaw dropping, while, in fact, she looked like she was about to sneeze, as well as to the audience and to the guy across the place. That is exactly kind of looks you don't want to have while you are doing exactly the same thing. As you are practicing your wink, make sure that your other eye is wide open and not just halfway open; otherwise, there is the sneezing face instead of the desired eye-catching wink face. You might actually get this looks while you are practicing, and that is, actually, a good thing. That way you will notice what you are doing and correct this before it becomes so natural, that you can't control it anymore.

4. Try it out on a friend: friends forgive

After some practice, when you feel ready, it is time to practice that on someone who can give you a totally objective feedback. By practicing in front of someone other than your own reflection in the mirror will be really significant in two ways. First one, you will see how it is to do your winking body language in front of someone and not looking at yourself at the same time. This way you will build up the feeling you have while trying to seduce someone and the next time you do it, you will know what effect your actions have. The second one, you can both laugh at your attempts to look ravishing and mysterious if you are, in fact, looking like you have something in your eye. Laugh is the best thing about this situation. Still, you will get the feedback about how you really look like in someone else's eyes, regardless of how you think you look. Observe this as a trial with potential embarrassment, with not having to think if your friend is going to tell someone and embarrass you even more (because that is never going to happen, that is why it's your best friend).

5. Do it slowly and seductively: take your time 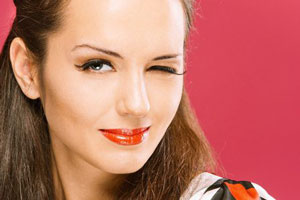 While playing with your sensual side, almost everything needs to be done slowly. Although you might have a feeling that its taking ages as you try to blink and wink, to someone else you might be looking like you got dust in your eyes and you're trying to get it out. A wink is something that needs to look soft and as feminine as possible. That is why it is better to practice it in a slower pace from the very beginning. That way, you will get used to that specific tempo and you won't be thinking about it when you finally do manage to practice it. One very interesting advice that can help out is: imagine a specific environment, with dimmed lights, the guy you are interested in and yourself in a pretty provocative outfit as an undercover agent or a spy from some movie. Still, he isn't actually looking at you; he is playing with his mobile phone. It is your job to get his attention and occupy his mind. Get yourself into the role, and you'll see, you'll have it figured out in no time.

There is one more thing that you need to do before you go out to break hearts all over the town- you need to make this winking eye look really natural. Just as there is naturally looking make up, or fake lashes that only give fuller look, but still appear as natural, this technique has to have the same effect. It needs to be as spontaneous as possible, with lots of confidence in what you are trying to achieve and without a trace of hesitation. If you show your hesitation, it simply won't work right. But, if you manage to show confidence, you can make any man fall down to his knees in front of you (in a figurative of speech). The whole body language must be adequate and in accordance with your intentions and only then will it be successful. Once you get that done, there will be no stopping you.

Always remember the examples from various cartoons or movies, such as Jessica Rabbit or someone else you know does this and manages to make you jaws drop to the floor. That kind of effect you will have once you master the technique of seductive winking at the guy you want to win over.

Posts Related to How to Wink Seductively: Secure the Man You Have Eyes On That We Thought You Would Like: Staff Picked Interesting Articles Worth Reading

In case you are struggling with allergies, for sure you know that there are different kinds of allergy medication that can help. However, you could also turn to allergy home remedies that don’t contain any chemicals and that are just as effective in fighting the symptoms. Find the best natural remedy for allergies.

How to Talk to Random People: Meet Some New Friends Easily

Usually people do not like to chat with random people because they do not really know what to say. If you follow the list of tips we have compiled, you will not have to worry about the conversation coming to a halt as you will always have a back-up plan to keep going. All you have to do is practice this skill.

How to Do Makeup: 9 Steps to Quickly Look Your Best in the Morning

A lot of women are interested in how to do your makeup perfectly. The truth is there is no perfect makeup; there are only things that work for you and things that do not. All there is you have to do is to find those tips that work and use them to enhance your features and hide your flaws from the people around you.

What Hair Color is best for Me? Choose the Right Look for You

What hair color is right for me, you may ask. There are hundreds of options for you to choose from and the decision might be overwhelming. The good news is that there is a foolproof method to know what hair color you should opt for. Read on to find out how to decide upon your new hair color to know it will be right for you.

←Previous Try Something New: Things to Do When You Are Tired of the Same Old Routine
How to Survive a Breakup: 7 Empowering Steps to Bounce Back Next→