Home
Girls Talk
Age Difference in Relationships: Is it Possible to Close the Age Gap?

Having a relationship with an age gap is certainly not the same as being with someone your own age, but isn’t a bad thing. There are certain things you need to learn how to handle in the process, especially when having an age difference in a relationship.

How to Deal with Age Gap in Relationships with Older Partners

In every relationship there are some problems people come across, sooner or later. Making the relationship be the way you want it to be, isn't always as easy as it sounds, but certainly every effort counts. However, when it comes to relationships in which one partner is a lot older than the other one, there is one constant dilemma: is there any way those two persons can overcome the age gap and reconcile the differences occurred by different mindsets based on their ages? There are some tips for dating a guy younger than you, which can surely give some answers on how to navigate through the relationship with a younger person. However, it's not the same when you are the younger person. 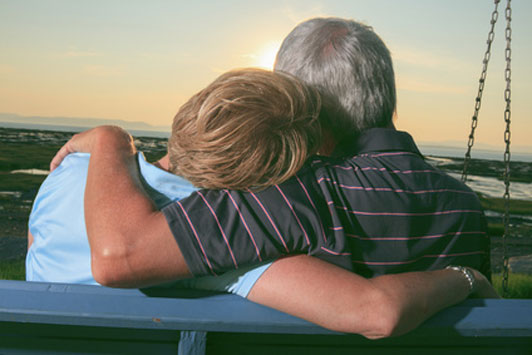 1. Sometimes the difference is too large

The age gap between two persons in one relationship can be like a sword with two blades- it can both build a great bridge and help them understand each other better, or it can present both a legal problem as well as a difficulty for both partners.

Don't do it just because everyone else does it, it's not a high school competition. Be involved with someone who is older than you because that person is really everything you are looking for in a partner.

Age differences can make a huge gap in this kind of a relationship. At one point partners start having different interests and views on the life itself, which can be crucial for the relationship outcome.

Be prepared for a long term explaining of your choices to all those, who are close to you, starting with family and friends. They might not understand in the beginning, but be sure that they will accept that over the time.

5. Don't use age difference as a crutch

If you plan to be with someone who is a lot older than you, be aware of the consequences of your choice. Separate personal differences from the fact that there is a huge age gap and don't try to pin everything you disagree with to that.

Age difference in relationships can be both a good and a bad experience. When two persons with the same mindset meet, regardless of their age difference, it can be a wonderful relationship, with lots of understanding and love. It can, however, happen that those two persons don't quite meet eye to eye when it comes to choosing the same life style.

1. Sometimes the age difference is crucial for the relationship

Have you ever thought about the age difference between two partners and how it may affect their relationship? Age gap relationships can be great, if the mindset of both partners is more or less the same. In those cases they tend to have similar preferences when it comes to the perception of life. But, the greater the age gap is, the bigger are the differences in their expectations, both on how they see their life together as well as which roles they will have. The main problem occurs when setting the priorities. Younger girl might not understand why her older partner doesn't have much time for her, or doesn't like to go to parties, and is constantly working. And older women dating younger men might have problems with their guys being with other girls at the same time or not being mature enough for what they want. Of course, there are always exceptions in such cases, but for most of them, the age difference is a crucial thing that makes the relations between partners even more difficult. That is why you need to think everything through and talk with your future partner about what you expect from each other and how much are you willing to compromise.

2. Know a reason for being with that exact person

Dating someone who is a lot older or younger than you isn't some kind of competition, as younger people tend to think. Dating itself isn't a competition, but a real thing. Age gap dating is one very complex process, which requires both sides to have a pretty mature attitude towards dating in general, to know what they are looking for in a partner, and to be totally sure that they won't find the same qualities in a person of different age. The same thing applies when a person is looking for a compatible partner for a serious relationship, with the only one difference: you need to be certain that you can bridge the age gap. At first, most of your friends and family will convince you that you need to reconsider, and that there are a lot more persons, who are more you age, etc. That is the moment you need to show them how mature you are and that you know what you are doing. If anyone gets the notion that you are doing it with superficial intentions, including the person you want to date, you'll never be able to make it work.

3. Generational differences can ruin the fun

As people grow older, their priorities as well as their view on life changes, sometimes drastically. At a younger age, people want to live their lives to the fullest and go from party to party. As the time passes by, work and family take the first place on their lists. And it's a natural process, which can, in the case of age difference relationship, lead to not understanding your partner's needs at the moment. For example: a 25-year old girl and 30-year old guy will have similar needs due to their not so big age gap, regarding the future life, starting a family, having children, going out with their friends on double-dates, etc. But, a 25-year old woman and a 45-year old man is a combination that needs both partners to meet each other half way in order to make it work. Now, imagine 25-year old woman and 55-year old man. While she would gladly go out with friends and have fun, he would rather sit at home and watch TV in peace. Now, that is an age gap which may be too much for one relationship to be successful in terms of partners understanding each other good.

4. Learn to handle the criticism you get

One more thing you need to be aware of when you have age difference in relationship is that a large amount of people won't quite get a hold of what you see in your partner and how you can accept that age gap between you two. People who don't know you might start with instant judging and guessing why you are with that specific person. It is pretty unusual and sometimes even unacceptable for people to have partners a lot younger or older than themselves. In accordance with this, expect to get a lot of criticism from every corner and every person you know, first of all- your family. What is important in this case is not to get angry at them. Understand that, whatever you're doing, presents something unfamiliar for them and they only want what's best for you. Learn to show them that you are taking the whole relationship seriously, that you know how to set the boundaries and that you know how to be responsible for your actions. At times, you might think it's a constant battle with the rest of the world and that no one will ever understand you. Rest assured that they will accept the situation at one point, they only need time.

5. Don't blame the age difference for things you don't like

Another important thing to handle in age difference relationships is being aware of the limit between personal disagreement and difference that occurs due to the age gap. There might be cases when your partner has preferences towards one thing, and you would rather do something else and that is a regular conflict in most of the relationships. Don't think that it's an age difference issue if your partner doesn't feel like going to the movies at the moment, or doing whatever you feel like doing. Your partner could easily be a lot younger and still not wanting to go to the movies at that very moment. If those situations do occur, try and re-think them over, analyze them and see what that's really all about. Avoid using the age gap as the excuse for everything you don't like in your relationship, starting from the way he/she dresses or behaves. Instead try to fix the problem by talking to your partner about the possible solution that will make both of you happy at the same time. That is the adult attitude you would have to possess in order to be able to make these kinds of relationships work properly for both sides.

In the end, dating someone is a private thing and you need to learn how to deal with every situation on your own, regardless if it's your music taste, certain behavior when you're with your friends, or, as in this case, age difference between you two. The main thing is how you treat all those situations- looking for a way to fix things and not looking for someone to take the blame for whatever you need. However, you do need an occasional advice from someone older than you, not because you can't do it on your own, but because someone might give you another perspective of looking at the possible solution of your problem.

Posts Related to Age Difference in Relationships: Is it Possible to Close the Age Gap? That We Thought You Would Like: Staff Picked Interesting Articles Worth Reading

What Do Men And Women Really Want From Their Relationships

When it comes to maintaining a relationship, it always requires a certain amount of effort on both sides. However, things may become much easier if you know exactly what men want in a relationship, and what women are looking for. Read this article for some tips on communication, personal space, and cheating.

Why Do People Cheat in Relationships? 7 Excuses Cheaters Make

Being cheated on is not a pleasant feeling and certainly not something people want for themselves, yet it is a common thing today, within many relationships and marriages. It is good to know why some people cheated, to be able to better understand causes and to eventually prevent being cheated on.

5 Long Distance Relationship Problems: How to Close the Distance

If you are wondering about how to save my relationship, you should know that long distance relationship problems are special and they need more attention. This is especially important since you can’t really communicate directly with your partner, so you have to find other means to work things out between the two of you.

6 Traditional Gender Roles: Are They Good for Modern Relationships?

If you are an old fashioned woman, most probably you agree with the traditional gender roles. Nonetheless, the more modern women might do everything in their power to break free of them. Do these stereotypes do any good to your relationship or they are only holding it back? Read on to find out more about the matter.