Your last date happened to be a year ago and it wasn’t much fun. If you are no fan of blind dates and just want to meet a nice down-to-earth guy, here are some of the best places to meet men, and what is even better: they are probably a walking distance from you.

No matter how hard we try, at some moment, we somehow end up feeling stuck when it comes to dating. As if going through a break up isn’t enough on its own, eventually we feel that it is time to move on. And that is a completely normal process, but sometimes it is easier said than done. Especially if you haven’t been hunting for a date in a while; In that case, you are probably wondering which are where to start. 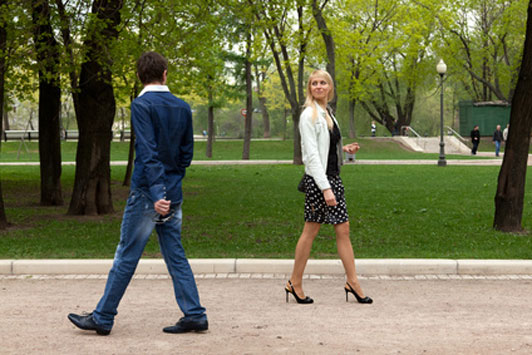 You Got Your Hair Done and You Put Your Favorite High Heels on but You Still Have No Plan about Where to Start? Take a Look at the 3 Greatest Places to Meet Guys Ever!

No matter how hard or pointless it looks, the reality can be quite different. If you only remember your first day at the new school, work, or college: it seemed terrifying. But you made it through anyway, right? So don’t worry about this. Decide on what type of guy you are looking for and start with your search. When it comes to best places to meet guys, let’s start with the simple ones:

Go shopping for a man...

Yes, it rings with the sound of a massive cliché from Hollywood romantic comedies, but that’s simply the way it is. Men need to eat to, and single men living on their own have to buy their own food, so: there you go! This is one the great places to meet men in a casual surrounding and very inspirative when it comes to conversation starters. If your biggest problem in the how to meet men process is to break the ice and start talking, this is the place for you. Ask him if he knows whether that new type of yoghurt is worth trying, or if he could be kind enough to get you that pack of spaghetti because it is too high for you to reach it. Once you made the first move, he’ll probably continue a conversation, and even if he won’t (he could also be too shy, but someone has to act, right?) you try and engage him in conversation.
And since you probably don’t like crowded supermarkets, there’s a great chance that he doesn’t like that either, so take your chance either early in the morning, or late in the evening, and good luck.

Coffee shops have become a part of our regular routine, regardless of whether we are still living on a campus and we need a buzz before 4-hour lecture in microbiology or during our break from a day at the office. If a local coffee shop is an energizing sanctuary for you, it is probably the same for dozens of other people including cute guys you haven’t still met. For that particular reason it is probably one of the best places to meet guys. It’s casual, you both come there for the same reason, so starting a conversation can’t be a big problem, and even if you don’t make a move right away, there is almost 100% chance that you will meet him again in that exact place. Who knows, maybe next time you see him, he will be the one to make a move.
When it comes to bars, the situation is similar, with some slight changes. When we say local bar, we don’t mean the bar where a bunch of drunkards spends a greater part of the day. Yet, what we mean is some local, regular bar, where men can go for a drink after a day at work, or where they could watch a game on weekends. So if what you are looking for is a regular, down-to-earth guy: put on some cute casual outfit next weekend and take your bestie for a drink to explore your new dating territory. Meeting single men is more fun over your favourite drink and with interesting people around.

Yes, that sigh you made when you read it was really loud. We are familiar what must’ve gone through your mind when you read that. How could that be one of the best places to meet guys? Most of us don’t even know the difference between ‘Star Wars’ and ‘Star Trek’. Don’t worry; nobody said you have to go all nerdy just for the sake of meeting single men. If you are really ambitious you can really visit some of those conventions, who knows, you might as well like it. But if you don’t really want to, you can visit a local comic shop or ask your nerdy cousin to introduce you to some of his friends.

Stop by a hobby shop

And about not knowing what nerdy guys interested in: Don’t worry, once you give them a chance, they will be more than willing to tell you anything you want about their hobbies. Or not, if you don’t want to, but believe you me: they can be adorable either way. At first glance, this might not seem as the best place to meet single men, but once you get to know them, you’ll easily change your opinion. The guys you meet there could be one of the nicest guys you’ll ever date. The thing is, they are usually introverts, and pretty shy, but once they realize that they are interested in them, they’ll be more than willing to let you into their world, and that world can be pretty awesome, too. So stop wondering how to meet men, and tryout dating nerdy guys.

We are here to give you options; of course, these are just some of them, the one that we find most engaging there days. There is a bunch of other possibilities out there, all you have to do is go out there and embrace them. Until you decide on which one you will try first, call your friend and go take a walk with your or her pup. Dog parks might not best places to meet guys, but you just might have enough luck to meet a cute lab and his even cuter owner. Take your chances, girl!

Posts Related to 3 Great Places to Meet Guys When Single and Wondering How to Meet Men That We Thought You Would Like: Staff Picked Interesting Articles Worth Reading

How to Meet Single Men: 7 Places to Meet a Decent Guy

The search for the Prince Charming that will be your perfect match can sometimes be really frustrating because you have no idea how to meet single men, as well as where to meet them. There are a lot of options for you to find out whether you like the guy, is he single or married and if he likes you back. Some of these pieces of advice will surely come in handy.

If you think the time has come for finding Mr. Right, you have to make sure that you do it the right way so you will not end up with Mr. Wrong. Make a list of steps that you should go through in order to maximize your chances of finding the right guy without losing any more time with all the wrong ones.

←Previous Top 3 Kissing Techniques: How to Kiss Well Enough to Make Him Purr
How to Avoid the Friend Zone with 5 Tips to Keep from Friendzoning Him Next→