Home
Girls Talk
Top 7 List of Phobias: Most Common Fears of Every Woman

Top 7 List of Phobias: Most Common Fears of Every Woman

We all have them; something to be scared of. But like they say, the only thing to fear is fear itself. First step to conquering your list of phobias is to first understand that other women suffer the same fears. Let us unite and fight our fears together!

You Have One of These 7 Phobias, Most Likely

This comprehensive phobias list is the only one that you will ever need to read. All of these different phobias have withstood the test of time. They are not for the weak of heart. These are the top 7 of the most commonly creepy, spine-tingling, neck-hair-raising, disturbing fears that plague all of us. In fact, if you don’t have even one of these phobias, you are truly a rare specimen. 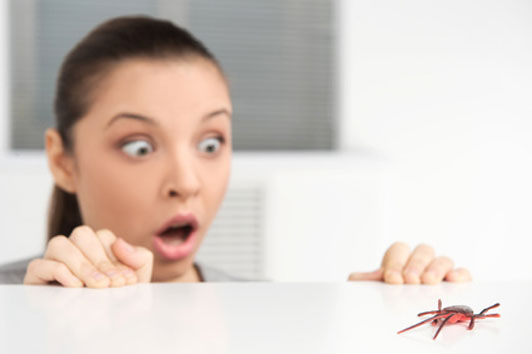 They range in size, from small and annoying to big and terrifying. Our fear of spiders is sometimes irrational, but they are just so gross!

Snakes are scary in appearance. It’s really hard to appreciate a snake’s beauty when one is anywhere in our vicinity!

Or rather, it’s our fear of falling that really makes us scared. Fear of heights isn’t easily fixed, so stay on the ground if it really bothers you.

The fear of crowds is one that really gets to us with social anxieties. There is nothing worse than feeling trapped and unable to escape.

Fearing something you can’t see can often be really terrifying. So try to sympathize with someone who has a fear of germs, because they can’t escape from it.

Sharp objects going into my skin? No thanks. The fear of needles is common among women and is often the reason many of us don’t donate our blood.

The fear of public speaking is deeply rooted into our DNA from birth. A bunch of people listening and judging me doesn’t sound too appealing. I don’t know how celebrities do it.

Whether it is creepy-crawlies, daredevil heights, a visit to the dentist’s office, or a fear of commitment to your boyfriend, there is always something out there for us to be afraid of. What do the majority of women fear most? We have the answer. Tailor your next prank around one of these fears, as it is possible that this list of phobias contains one of your friend’s worst fears.

To Graduate from Your Fears, Find Other Women with the Same Problem and Fight Together. This List of Phobias Applies to All Women Everywhere

This list of phobias is sure to clear up any doubts you had about being alone with your fears. Starting from the least common to the most common, here are the top seven phobias of women:

Out of all phobias in this list of phobias, this one is arguably the most correctable. The fear of public speaking is very common, but many women are able to overcome this through the right motivation. Being afraid to speak in front of large groups of people is a kind of social anxiety reserved for those with introverted tendencies. “Try to picture them in their underwear”, some would tell you. Some people just tell you to suck it up. However, the best way to conquer your fear of public speaking is to practice. You also must understand that you can only fail at first in order to learn from your mistakes.

Trypanophobia isn’t just the fear of sharp objects, it is the fear of needle injections specifically. It is the fear of a sharp object being inserted along with your blood and extremities. I have this fear more than any other on the phobia list. Needles creep me out. The thought of the needles being used before, although highly unlikely, creeps me out more. Giving blood is an impossibility for those with the fear of needles. The only time when you can convince someone like this to take vaccines, the only time to do it is when they are babies. By the time a girl grows into an adult with a fear of needles, good luck trying to convince them.

Wash your hands, that’s what we always heard growing up as kids. And for good reason. The fear of germs is one of the more unusual phobias, as germs are everywhere. People would rather avoid illness. But mysophobia takes it to another level. Have you ever known anybody who is obsessive about exposing themselves to bacteria? Mysophobia. It is another crippling fear that causes people to isolate themselves from the outside world in pursuit of the perfect health. The only problem is, humans aren’t supposed to be healthy all the time. Getting sick occasionally will make our immune system stronger. Sure we’ve all known people who get sick once every one or two years. But when they get sick, they get very sick.

Fear of crowds, or even open spaces, is what defines agoraphobia. It is the fear of too much or too little space. Similar to claustrophobia, it is the fear of situations where escape is difficult. Those with this fear are prone to high anxiety and panic attacks. Agoraphobia is the number one social phobia on the most common list of phobias that limits us to the confines of our own homes or other comfortable places. Fear of crowds is a crippling phobia in terms of those with mental illness correlation. It is common to find those with panic disorder develop agoraphobia sometime in their lifetime.

Fear of heights makes the top three most common list of fears in modern society. I think it’s safe to say that everybody is afraid of heights to some degree. I mean, the thought of falling down is impossible to avoid considering. Many of our nightmares consist of falling down tall places. By getting on a roller coaster we are taking a slight risk for our lives, and that slight risk is what gives us the excitement to live. However, acrophobia is an irrational fear of heights. This is when someone refuses to get on airplanes or into amusement parks. This fear of heights causes someone great anxiety when around high places.

The fear of snakes is well-documented in history as one of the most common fears on the phobia list. All reptiles, in fact, those slimy smooth exteriors. Just something about the texture of snakes that gives me the creeps. There is a good reason to be fearful of snakes, as some are poisonous and dangerous to humans. But the surprising thing is that there are far more lethal animals out there than snakes to be worried about. But for some reason, fear of snakes is high on phobia lists. The truth is that, if you can get over your fear of snakes, they actually make great pets.

Almost all species of spiders are for the most part are harmless to humans. However, the fear of spiders tops the list of phobias as the most common fear among humans to this date. What is it about these crawly little insects that makes our blood pressure rise to heart-stopping levels? Well, they have more than 4 legs. That’s pretty creepy. And if there happens to be one inside my bed, forget about it. I’m not sleeping for the rest of the night. And to top it all off, the webs they spin are difficult to see. Running into one makes me want to take a shower immediately.

Posts Related to Top 7 List of Phobias: Most Common Fears of Every Woman That We Thought You Would Like: Staff Picked Interesting Articles Worth Reading

Fear of Flying: 8 Ways to Prepare Yourself for Your next Flight

Get over your fear of flying with some essential tips to get your mind off of things you cannot control. It helps a lot if you have something to occupy your attention away from the fact you are thousands of feet up in the air. International flights usually have you covered, but for domestic flights you will need to bring something of your own to take your mind off the turbulence.

Social Phobia: 6 Empowering Ways to Overcome Shyness Holding You Back

Social phobias are becoming more common among the young crowd. They are developing due to technology dependence among other things not as common two or three decades ago. The secret to overcoming social phobia is to detach yourself from what started your fear of people in the first place. Then start putting yourself out there. Simple as that.

Having a Fear of Heights: 13 Life Experiences You Will Miss

When will you get over your irrational fear of heights? After life has passed you by and you haven’t even done some of the most awesome things that the world has to offer? Not any longer. This list of must-do life experiences will motivate you to get up off the ground and up in the air. Your fear of heights is holding you back from achieving your true potential. Don’t miss out on all the fun!

The 8 Major Emotions List: How to Effectively Use Your Emotions

This major emotions list is a comprehensive guide to using your emotions effectively. Whether you are in a high or low moment, it is important to know when to show your emotions and when not to. Each emotion has a purpose. Find out each purpose and become the master of your emotions with this list of feelings.

Fear of Going Outside: Sure Things That Help You Get Out

Agoraphobia is a fear of going outside, or a fear of being in public places. This phobia can keep one from going outside for weeks, months, or even years and can be damaging to one’s physical and mental health. The thought that outdoors can provoke intense anxiety in some people is unimaginable to others. Learn how to cope and get over your fears.

←Previous Internet Addiction: 8 Signs of Dependence on Technology for Everything
6 Must-Know Sleep Walking Tips from Sleep Forensics Experts Next→