What does night eating syndrome mean?
If you eat later at night right before going to bed the risk of developing metabolic syndrome increases not to mention gaining weight in fat. 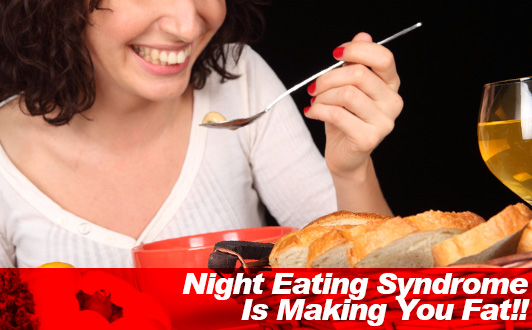 Night eating syndrome is more common than you think. Eating later at night may be the reason your diet and exercise program isn't going as planned not to mention the metabolic syndrome that comes later if you are not careful. Get on top of your diet eaten well before you go to bed at night.

What is night eating syndrome?

For people getting home later during the day with no choice but to eat later at night, you may be thinking that's not night eating syndrome. As much as you would like to believe that it isn't, it's an unhealthy start to a story with night eating syndrome written all over it. The worst illness is not accepting that something is wrong.

In this night eating Slism, we discuss the problem of night eating syndrome in terms of your diet and weight loss giving you the heads up you need to keep eating later at night from making you gain weight.

Night eating syndrome ends up in sleeping after you eat

Life can be busy with the demand of modern times. The number of people eating late in the night is on the rise. Even if you aren't exactly on the overtime bench sitting with you head planted thinking of a way to get home and eat dinner, that doesn't mean you are safe from the terror of night eating syndrome.

Men are more likely to eat late than women…

The number of men and women eating 2-3 hours before going to bed is on the rise. Although the number of women failing in their diet not giving your body the time it needs to process your dinner is not as much compared to men, that's may be because ladies tend to be more willing to take up self-maintenance measure than men.

Eating late at night doesn't help you keep you daily calories under the good. In fact, the time you eat affects your diet. In particular, eating late at night sets you up to gain weight fast. Your body burns fewer calories towards the wee hours of the night making you more susceptible to putting on fat. Adipocytokines get sent out by your body telling it to store away excess energy in fat cells leaning your metabolism towards energy storage.

Leptin is on Adipocytokine that in addition to suppressing your appetite boosts your metabolism. Eating late (2-3 hours before going to sleep) doesn't take advantage of Leptin. What happens right away is that your blood sugar level shoots up resulting in energy being turned into fat. This is not that uncommon in night eating syndrome.

The levels of leptin in your body are low later in the evening causing you to naturally feel less hungry if you can help it. That means eating earlier in the day, preferably well before 2-3 hours right before going to sleep.

Night eating may cause metabolic syndrome…

Although most people like to eat those carbs when out drinking, this sort of habits should be avoided when especially when eating late at night. More often than most, people who have developed night eating syndrome all fall into the same trap, eating late is okay as long as it's not carbohydrates.

Avoiding carbs when eating late at night will help keep night eating syndrome from ruining your diet. Taking up low calorie foods such as a healthy midnight snack or other healthy habits is highly recommended.

When your body moves toward storing visceral fat, Adipocytokine is send out by your body to let everyone know it's time to start storing fat. High levels of Adipocytokines are said to increase the risk of developing illnesses such as diabetes and heart related diseases.

Although Adipocytokines have a bad reputation for making you put on fat, they are important to keeping your lipid (fat) metabolism healthy.

Posts Related to Night Eating Syndrome Is Making You Fat!! Healthy Habits That We Thought You Would Like: Staff Picked Interesting Articles Worth Reading

Don’t let eating late stop you keeping up with your diet plan. Here are the crippling effects that fill make you fat and ruin your well deserved good night sleep.

Who said you couldn’t eat without gaining weight? They’re full of air like a balloon. Just chew your food and eat before it gets dark out. That’s all it takes.

Hormones To Lose Weight By Sleeping For Appetite Control

Craving something to eat at night wouldn’t be a problem if you just got more sleep at night. Studies connect sleeping habits with weight loss indicate that hormones are the key to appetite control.

5 Meals A Day: Balance Your Diet By Eating More And Still Not Get Fat

Hungry already? See how you can now eat more and still lose weight with balanced meals and a smarter diet. Keeping the fat off has never been easier.

←Previous Dessert Stomach!? Why There Is Always Room for Desert
Get Your Dream Body! 4 Tips Imagining the Body You Want Next→