Hormones To Lose Weight By Sleeping For Appetite Control

Appetite control with you hormones?
It turns out that by sleeping you give your body just what it needs to keep you from binge eating so before trying to change your diet first consider getting some sleep.

With a reputation for working late hours, the Japanese Diet turns its eyes towards how sleeping effects the outcome of your diet. Do people in Japan need more sleep – or does it even matter at all? In this Slism, find out the connection between sleeping and your diet and how neither one should not be forgotten, if you want to control your appetite.

People often associate sleeping with gaining weight. It turns out that sleeping plays just as an important role of in your diet as eating and alone is not why you get fat. That's right, sleeping is a friends in your diet. Why is that?

How can I naturally suppress my appetite?

Ghrelin boosts your appetite making you want to eat something. When you do find something to put in your mouth to satisfy your appetite, at times it is already too late before you notice you've overeaten. This is one reason why people gain weight.

On the other hand, Leptin has to effect of inhibiting your appetite so that you won't want to put food in your mouth, making it harder to gain weight the same way that Ghrelin makes you by eating. That is why just by increasing the amount of Leptin in your body you can give your diet the boost it needs to help you lose weight and keep it off.

Leptin to destroy your appetite naturally

The subject of how to increase Leptin levels in your body to benefit your diet is undergoing continued research. In particular, the collective findings of Stanford University and the University of Chicago regarding hormone balance relating to sleep with be presented in this article on how sleeping affects your diet.

Control Appetite by Sleeping Longer and Wake Up Refreshed

In the study by Stanford University people were separated into two groups, one with people sleeping less, and another with people sleeping more. Results were shown comparing the level of Ghrelin and Leptin in the blood of about 1000 people participating in the study. People who got a good night of sleep had higher levels of Leptin and lower levels of Ghrelin in their blood, whereas the group containing people who lacked sleep had the opposite effect. The results of this study strongly indicated that these hormone levels were independent of the sex of a person and their diet.

The University of Chicago observed the effect of getting enough sleep on in 10 people versus how the lack of sleep affected another group, similar to the previously discussed study. Over half of the subjects in the group getting less sleep were found to suffer from rebound eating. Looking at the results of both studies it is clear that it is easy for people who don't get enough sleep to get fat. Just about how much sleep should people get a night to maintain their weight?

8 Hours a Night to Boost Weight Management without Pills

In the study by Stanford, people were separated into two groups, one with people sleeping at least 8 hours, and another with people getting at most 5 hours a night. The difference between these groups was determined by looking at the blood levels of Ghrelin and Leptin that control you appetite.

Although the results of this study do indicate that getting 8 hours of sleep is better than 5, what you need to take out of it is that is to get at least 8 hours of sleep to give your body what it needs to release hormones essential to maintaining your weight, improving your changes of diet success.

When staying up late, it's hard to get the feeling that you've eaten enough. Eating at this time only results in uncontrollable binge eating that while not doing helping your burn off energy, resulting in tons of energy to be stored away as fat.

Although you burn off energy while sleeping due to your basal metabolism, when this energy becomes low and your body tries to break down fat. When you eat late at night it becomes unnecessary for your body to try to break down fat that doesn't help when you are trying to slim down. This is exactly why they say "Don't eat before your sleep." 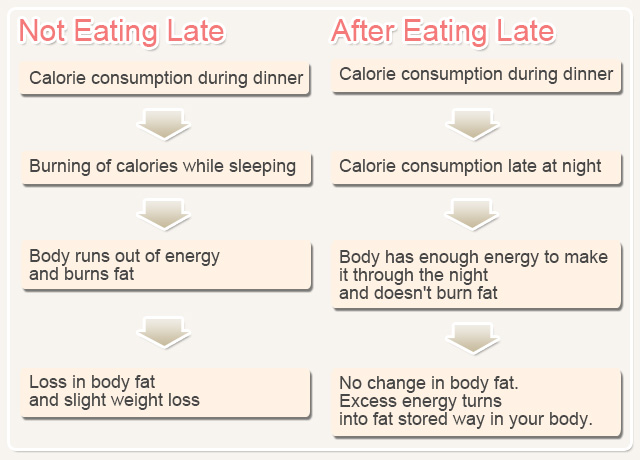 After long nights of work getting back late, it's not strange to be hungry and feel like you are going to need a little help to get it through the next morning. At times like this chewing a piece of gum is a good way to trick your body into thinking that you've eaten.

On times when the simple urge to put something in your mouth to satisfy your hunger and you have no other choice, make the healthy choice by choosing something low in calories.

As much as getting enough sleep can make or break your diet, suppressing your hunger late at night may be just as important.

Posts Related to Hormones To Lose Weight By Sleeping For Appetite Control That We Thought You Would Like: Staff Picked Interesting Articles Worth Reading

Is getting sleep that important to losing weight? In addition to helping your brain function properly getting an adequate amount of sleep helps you win big.

Sleep May Be Why You Can’t Lose Weight!? A Sleeping Diet

Are you getting the amount of sleep you need to lose weight? If you are not getting more than 5 hours a night you rick eating junk food and snacking at night.

Not sleeping enough at night spells out putting on pounds with punctuation. New sleep studies suggest that sleep and weight loss are interrelated that you think.

Appetite Getting In the Way? 6 Tips to Control Appetite

Having trouble controlling your appetite? Here are some tips to control appetite naturally without having to worry about counting calories. Get started curbing that appetite.

Love and Weight Loss: How to fall in Love to Lose Weight

Hormones are a daily part of a women’s life. When you are not dealing with you period, what’s left is trying to balance your hormone on a diet. What happens when you fall in love?

←Previous Squat Your Way to A Great Butt: Do It Right First Tips
Normal Body Temperature? – Maximize Increase Metabolism Next→