Fate or Genetics: Parents Or Obesity Gene Making You Fat

With growing global obesity we look more and more on how the obesity gene affects our wellbeing and ultimately the shape of our body.
There is more to fat than genetics which controls your weight that is your lifestyle.

Don't quit just because a guy in glasses wearing a lab coat tells you that you have the obesity gene. With hard work and a little elbow grease there is nothing that you can't do. It doesn't matter if you parents are fat. Genetics are not the rails that you think they are.

The Obesity Gene Really Exists! – DNA That Scientist Say Put Weight on You

In you genes are the blueprints that make or break your body. In understanding the Pandora's Box that your DNA is like, researchers in the field of health medicine have made discoveries liking you genetic code to why you are having trouble with weight loss.

Does having the obesity gene mean you are going to get fat?

You've probably heard words like "The Thrifty Gene" and what Japanese like to refer as "The Waste Gene", when discussing genetics relating to your diet. What you probably don't know is that the Obesity Gene is in fact a collection of all genes that can be linked back to the DNA of gaining weight.

The Thrifty Gene: Isn't That Something That's Supposed To Make Me Skinny?

Historians and genetic research alike believe the thrifty gene may have been exactly what people needed hundreds of years again in times of drought, but in modern day times this trait that people have passed down from generation to generation may be what is kicking your diet in the butt.

The thrifty gene is a genetic trait that promotes the storage of energy from the food you eat, minimizing the energy you burn off in the process.In other words it's a gene that makes it easy for you gain weight.

In the past people had to live on the road like nomads. Although food was scares, people had to stay on their feet turning food into fuel faster just like pouring gasoline into a horse. That's where the waste gene is said to take its roots, in the days where people had to keep on moving to survive.

The waste gene is a trait that geneticist believe to be associated with the instant conversion of food into energy to be burned off by your body immediately.For people who want to diet that means it's a gene that makes weight loss easier.

The thrifty gene was advantageous to have in times when you wanted to make it through times when getting breakfast wasn't something that you were guaranteed to have. It's nothing short to say that the human body is amazing when it comes to adapting to environmental availability.

However, just because there is a possibility that you have the thrifty gene and even if you do that you are destined to grow into a large enough mass such that gravity changes around you. No, having the thrifty gene alone is not enough to doom your dreams to get slim and keep your weight off for good building self-esteem around your body.

What to expect out of the thrifty gene is that: No you won't get fat; but yes you are more prone to gain weight than someone with the waste gene. Although genetic traits play a large part in the physical makeup of your body, that doesn't mean that you have to let your body take over. The mind controls the body and so does it determine how your diet will work out.

In reality, the effect the thrifty gene has on people's diet is not as you would believe. Take a look at how this trait effects the population in Japan. Despite the fact that over half the Japanese population are said to have inherited the thrifty gene, people are still making progress in their diet earning the title of country with the lowest ratio of obesity in the world.

Now let's take a look at how people that gain weight and people that lose it differ that goes beyond genetics.

Genetics Not Destiny: Lifestyle Is the Reason Why People Become Overweight

So what is it that separates people who get fat easily to those who just can't put on weight even if they try? While there are those that are able to fight the system, stay thin even they're genetics indicate that they shouldn't. How this divide set up by peoples genes become more apparent is when looking at how people live their lives, lifestyle choices independent of your genetics.

If my parents are overweight, does that mean I'm destined to get fat?

For children following the same living style as their overweight parents are said to take a big hit in terms of their diet. This gives us reason to believe that obesity genes may not be a complete formula explaining why people gain weight and can't keep it off. Attacking the root of the problem, parents need to emphasize balanced nutrition to their children. The fact is that there are more people becoming obese because of lifestyle reason than people suffering from genetic traits that work against your diet. Consider that before selling yourself short of just about to get on a diet. 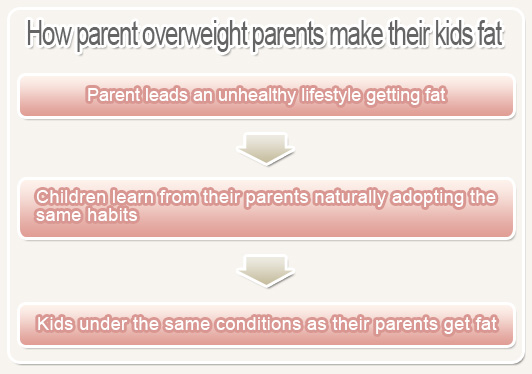 As you can see the obesity gene is not all to blame regarding weight loss issues. Sometimes the reason for parent-child obesity has nothing to do with genetics; but instead how what life habits parents pass down to their children.

Are There Other Factors Besides You Genes? – White to Do With White Fat

It turns out that there is something that you are more likely to inherent from your parents than the obesity gene that is white fat cells.

As you may know already, there are 2 kinds fat which are white fat and brown fat. The activation of brown fat is takes excess energy in your body and produces heat resulting in thermogenesis. Brown fat activation is triggered when your body receives signal that it is cold. No wonder why people consider it to be the good fat. Brown fat is not a threat to your diet, but white fat is.

White fat also known as "fat" is how your body stores away energy that it can't use immediately for later use. When the amount of this type of fat becomes large it is said that is becomes easy to gain weight, in others words a downward spiral threatening the outcome of your diet.

When it comes to white fat, there are 3 times in which it is easy to put on fat, which are: 1) when you are in the womb before birth; 2) after birth until reaching 1 year old; and 3) during puberty. During these three times in your life your body is trying to take in as much nutrients as it can get. Resultantly, this means putting on a lot of fat.

What to Watch Out For: The Times You Put On the Most Fat

There isn't much you can do about periods 1 and 2. This is a time when parents need to give their children all the nourishment they need to support the enormous rate at which they are growing. Just a word of precaution though, all eating too much just turns into white fat.

Weight issues or not something that teens want to deal with when trying to sort out many other things. For young ladies this is the added stress that makes it seem harder to get though the changes.

Note that food alone will not lead to you becoming fat. People who lack exercise are susceptible to gain weight as well.

I know that if you are reading this article you are neither a baby or probably not in your teens. Even so you can see why genes aren't everything in determining the shape of your body. How you live your life and your age also play a large part in the question of why it is we gain weight.

Posts Related to Fate or Genetics: Parents Or Obesity Gene Making You Fat That We Thought You Would Like: Staff Picked Interesting Articles Worth Reading

Don’t be too hard on yourself. It may not be your fault that you are overweight. It turns out that there are more people that you know that have what is called the obesity gene. Here are tips to find your inner anti-obesity.

Physician assisted weight loss, have you heard of it? If you are struggling with losing weight it is a sure shot to treat being overweight with one fell swoop.

Childhood obesity is a global epidemic. While others are receiving the fat letter to send their kids to fat camp, here is how you deal with it like an adult.

Diets Around The World: Obesity On A Global Scale And How Countries Stay Thin

What diet trends are happening throughout the world? See how people all around the globe are eating better to fight of the obesity. The may be surprised what you see.

←Previous How to Diet on a Period: Keeping Your Hormones In-Check
Hot Yogurt: Steaming Cup Of Probiotics Aiding Anti-Aging Next→