Let's face it, fat kids shouldn't be blamed for their weight issues.
That's no way to address the concerning issue of childhood obesity. Here's how you do it. 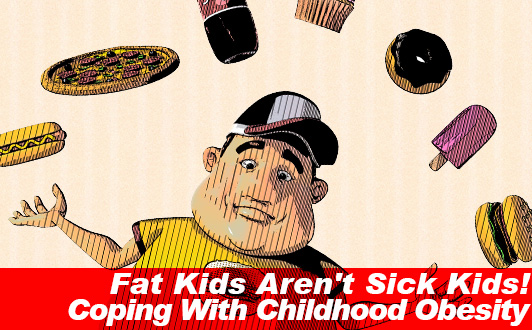 Fat kids aren't to blame for their weight problems. It may be time to stop pointing finger and sending fat letters. Find out what you can do to cope better with childhood obesity for the better interest the children that need your help.

It is said that about 70 percent of fat children remain fat into adulthood. Some even believe that fat kids have an evolutionary disadvantage when dealing with obesity as adults. They are said to be at higher risk to lifestyle disease than children not being bullied by weight issues receiving the fat letter.

Overweight children are on the rise!

Although being overweight is almost always though as a middle aged problem. Chubby kids get called overweight all the time. In fact there is a high chance that children dealing with weight issues may have high cholesterol and triglyceride causing blood pressure and blood sugar level to rise disproportionate to age.

For the best interest of children dealing with weight issues early on in life dealing with these issues help improve their overall lifelong health perspectives opening up opportunities never present before as well as eliminating one source of potential bullying throughout secondary school.

As a parent you are in the position to take a stand against the global obesity epidemic giving your child a fighting chance against a world of hate that comes with being overweight.

There are many causes of childhood obesity that including the following.

Most parents would agree that worrying about calories and what time their kids eat is a waste of time. However, left unmanaged this is a sure recipe to get fat even for children. As you would expect, not paying attention to caloric intake and the amount of time spent exercising is the main reason why childhood obesity has sprung into such a larger issue.

Children who spend longer hours playing video games sitting in front of a television compared to children playing outside getting daily exercise have high degrees of obesity across the board. One way to fix this problem is to determine the amount of time you allow your kids to invest their time in media entertainment

A diet method for children that doesn't mess with growth

As much as you want to help you children to lose weight and evade being called the fat kid, it is better to quit while you are still ahead if trying to lose weight interferes with the healthy growth of your child. Most parents would agree that it is maybe better to wait until they are older to start dealing with the issue just to be safe.

On the other hand, there is nothing wrong with eating a balance diet and exercise that couldn't help you children get on the right track.

Choices in how you live your life as little as they may sound are the key determinants that add up over time causing such heartbreaking issues like childhood obesity to happen in the first place. Here is a list of things that should be watched out for when trying to cope with obesity in children.

Do any of the above sound familiar? If so, what follows are ways to kick away at childhood obesity helping your kids built the habits they need to be free from being overweight in adulthood.

Getting your kids out more exercising is how you increase their daily calories burned making a dent in the fat that needs to be lost while promoting increases of lean muscle mass necessary to boost their metabolism making the process of losing weight much easier to say the least.

Along with helping your kids burn more calories, exercise is said to be great for dealing with stress and promoting healthy growth.

However, deliberate exercise such as signing your kids up for the gym may not be the right approach. Encourage healthy activities that allows for interact with other children such as sports or simply meeting up with friends in the park.

Encouraging walking and riding a bike versus getting dropped off or picked up is one way to increase the amount of exercise your kids are getting without sending them to the gym.

Having you kids help around the house doing more chores is another way to burn calories without having to resort to deliberate exercise.

Waking up earlier and going to sleep at a scheduled time can make a big difference in the behavior of your child even when it comes to how they cope with their diet and weight problems.

Children who eat breakfast everyday with time to spare before doing anything else such as going to school are less likely to develop bad lifestyle habits in the future.

Make choosing healthy lifestyle habits a family affair. People are more likely to conform when put in groups. The same goes with your family. Make sure everyone is one board for the ride. The more the merrier as they say.

There are two schools of through on the matter of whether overweight parents are the blame for childhood obesity. Whether it is genetics or pure fault on the parent's behalf not enforcing healthy lifestyle choices, you would be surprised what is out there nowadays.

Posts Related to Fat Kids Aren't Sick Kids! Coping With Childhood Obesity That We Thought You Would Like: Staff Picked Interesting Articles Worth Reading

Fate or Genetics: Parents Or Obesity Gene Making You Fat

Genetics or not fate. The fat in your genes don’t make or break your diet. Even though you have an obesity gene there is hope; but not the same can be said about how parents raise their kids.

Don’t be too hard on yourself. It may not be your fault that you are overweight. It turns out that there are more people that you know that have what is called the obesity gene. Here are tips to find your inner anti-obesity.

Can you do this simple movement?If you can’t, then there is a high possibility that you will become bedridden in your senior years of life.Learn how to guarantee that you can play with your grandkids. There’s still a chance.

Diets Around The World: Obesity On A Global Scale And How Countries Stay Thin

What diet trends are happening throughout the world? See how people all around the globe are eating better to fight of the obesity. The may be surprised what you see.

←Previous Drinking Soy Milk Good For You? Just 1 Cup before Eating
What Foods Have Zinc In Them? Top Zinc Rich Foods List Next→