The Coconut Diet to Lose 10 Pounds worth 20 Dollars Down

Your diet is worth more than 20 dollars.
Put more into your diet taking 2-3 tbsp of pure coconut oil and get more out of weight loss losing 10 pounds. 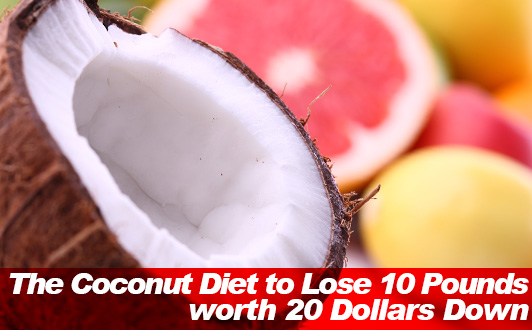 The coconut diet may sound like a fad but it is not. Despite its claims of being able to help you lose 10 pounds in 21 days there is no reputable scientific evidence to support it. However, that doesn't mean that you come out empty handed trying your luck in virgin coconut oil weight loss.

What is the coconut diet?

The Coconut Diet written by Cherie Calbom (who now spends most of her time in the spotlight on TV widely known as The Juice Lady for her work in juice therapy and cleansing) in 2005. In the her book, she claims that you can lose 10 pounds in 3 weeks just by adding coconut oil to your diet while still being able to eat your favorite foods.

The Juice Lady Coconut Diet in a Nutshell

This is the phase where you cut back on carbohydrates. In addition practitioners of the coconut diet advice avoiding fruit, alcohol, dairy products, caffeine, and sugary food. During the kickoff you are allowed to eat 3 meals a day with 2 snacks in between consisting of nuts, vegetables, and lean protein such as fish, chicken, and beef.

The second phase is where you start juicing to cleanse and purify your organs. Adding to your vegetable and protein diet, you will find the recipes for the liquid concoctions you will be drinking.

The third phase regardless if you carried out the directives of phase II or not, is where you reintroduce carbs back into your diet by adding starchy vegetables like potatoes, fruits, and low-gi whole grains.

Begin to reintroduce more foods into your diet. This is where being able to eat your favorite foods and still lose weight approaching your ideal weight comes into play. Even so, you still want to avoid sugar, certain fruits, and alcohol.

So you start going on a diet with hopes of losing 10 pounds you might have laying around to lose, during in which you spend most of your time worrying whether are not you are good enough to make weight in time.

Alright maybe the coconut oil diet is a fad diet.

Are you willing to put your body on the line spending months trying to make temporary weight loss work for only $14.99?

Let's face it. What you get out of your diet is what you put in.

Throwing down a twenty so that you can spend the next few months aspiring for self-improvement only to find out that pure coconut oil isn't the sole secret ingredient diet that is going to give your results you can see while making you feel good inside.

How the coconut diet works

The Coconut Diet isn't rocket science. While others are jumping between phases making unnecessary effort to lose weight, you can relax because the only rule to this coconut diet is that you get 2-3 tablespoons of coconut oil a day in your diet.

Getting 2-3 tablespoons of coconut oil a day is going to cost you 220-332 calories in your daily caloric intake. As you can see the calories in coconut oil should not be taken lightly. Three hundred calories is enough to set you back spending at least half an hour jumping rope. So, why is the coconut diet even considered a ways to lose weight?

People with an extra twenty in their pocket know that a diet solely to lose weight is like a fad diet waiting to come out of the closet and put you back on the rebound, again looking for the latest and greatest that is going to help you fit in or fit out if you don't have what it takes, as the saying goes you get what you put in.

How you get the most out of the coconut diet starts by using coconut oil you've been allowed to eat without getting fat to benefit your health.

Putting cheap vegetable oil high in trans fat may save you some money at the grocery store. However, when it comes down to it putting down a twenty for your health and promoting weight loss is a high return investment that you don't want to miss out on trying to skip in your diet to save money to get a gym member ship.

Unlike garden variety cooking oil high in trans fats, coconut oil has something (a secret ingredient) that is used in an entirely different way your body in comparison-to other forms of fat. That something is saturated fat.

Saturated fat is better than partially hydrogenated vegetable oil(which contains saturated fats produced through the hydrogenation of unsaturated fats) used to make margarine as an alternative to butter.

Medium chain triglycerides in virgin coconut oil have drawn the attention of medical practice (in its use to treat patients suffering from malabsorption syndromes leading to malnutrition), and endurance athletes and bodybuilders to improve exercise performance and excess calorie burning.

Although the milk fat of horses contains medium-chain fatty acids, it is not as available a source of medium chain triglycerides as coconut oil.

Pure coconut oil is unarguably the best natural source of virgin medium chain triglycerides that in addition to being more feasible than other sources of medium chain fatty acids such as horse milk fat is a good start at reducing intake of trans fats taking a toll on your health.

Coconut oil contains Vitamin E that acts as a protective barrier against potentially harmful fatty acid oxidation and cell damage caused by air pollution and tobacco smoke, while boosting your immune system producing an anti-aging effect on your body.

Coconut oil medium-chain triglycerides are easily metabolized by your body acting as quick energy that your body can use without using energy. It is favored by endurance athletes and bodybuilders trying to improve exercise performance and metabolic throughput.

Bottom line on the coconut diet

There is no evidence to support that coconut oil alone can guarantee that you can lose 10 pounds in 21 days without exercising and healthy. Although virgin coconut oil help you dodge the bullet of eating too much trans fats, too many people hit the fence using the same diet methodology running into the eye opening wall of too much saturated fats.

The American Heart Association recommends that you eat no more than 7 percent of your total daily calories in saturated fat on a 2000 calorie diet. That's only 117 calories.

By dieting on coconut oil you may be going over the limit on calories but won't be missing out on some of the benefits of saturated fat in your diet such as better heart health, resistance from liver damage from drinking, and healthier bones.

Coconut oil isn't the only by product of coconuts that is grabbing the attention of crowds of people treading through new grounds in diet and exercise. Coconut water is the new standard in exercise recovering standing in place of sport drinks such as Gatorade and powered. The natural sports drink, only called coconut water. Who's doing it? - Madonna. Rihanna. They try everything and so do un-celebrities.

Posts Related to The Coconut Diet to Lose 10 Pounds worth 20 Dollars Down That We Thought You Would Like: Staff Picked Interesting Articles Worth Reading

Have you been watching your intake of trans fats to lower your numbers? The FDA is making it easier to avoid trans fat by banning them. Netizens say, ‘it’s about time!’

The Daikon Diet is no laughing matter when it comes to diet. It wouldn’t be if just by adding raw Daikon to your diet, you too can lose over 10 pounds in a month. Nobody knew all you had to do to slim down into your ideal shape was to have a little more Daikon in your life.

Can’t figure out how to lower your numbers? Eating foods with a good balance of healthy omega-3 fatty acids helps to reduce unhealthy bad cholesterol.

Coconut water is the new sports drink. Celebs are doing it. Runner and diet junkies never leave home without it. Replenishing your energy after exercise has never been so natural and exotic.

←Previous No Good Foods? The Dangers of Too Much Bad Cholesterol
The Blueberry Diet: Eating Blueberries to Lose Belly Fat Next→