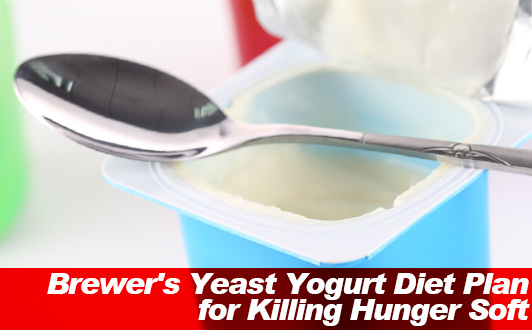 Brewer's yeast mixed with yogurt in your diet may help you kill hunger pains before they start. Combining the health benefits of dietary fiber and good lactic acid bacteria nothing can go wrong when it comes to getting rid of constipation and appetite satisfaction to help you keep on moving.

When it comes to killing hunger pain, brewer's yeast in your diet gives you the edge you need to prevent overeating. Brewer's yeast expands in your stomach producing a filling effect serving as a natural way to eat less still getting full.

It addition to helping you satisfy your appetite eating less, brewer's yeast may help you burn fat faster and get rid of constipation.

For reducing food intake eating less calories, eat brewer's yeast yogurt 30 minutes prior to a meal. If you are in to snacking, don't let anything stop you from exploring food combining recipes. Like the plain yogurt and skim milk diet, brewer's yeast yogurt into the healthy snack that is going to transform the way you go about dieting.

Limit the meals you replace with brewer's yeast to one meal a day.

Although brewer's yeast is high in nutritional value it doesn't replace balanced eating habits eating a variety of foods. Make adjustments to your diet for nutrition lost replacing a meal with brewer's yeast yogurt.

HOW TO MAKE BREWERS YEAST YOGURT

Health Benefits of Brewer's Yeast for a Better Diet Now

For health weight loss brewer's yeast is recommending to promote faster burning of fat and carbohydrates, prevent constipation, and keep wrinkles away from your face.

Brewer's yeast is a rich source of B vitamins that speed up your metabolism helping your body burn fat and carbs faster. In particular, vitamin B2 also known as the fat burning vitamin is essential for burning fat. Lack of vitamin B2 in your diet adversely affects your ability to burn fat.

However, getting vitamin B2 is not enough. Ideally, you want to get a balance of B vitamins to ensure best result.

Brewer's yeast is a balanced source of B vitamins that makes it easy to burn fat and carbohydrates.

As a fiber rich food, brewer's yeast is hard to top. As you know dietary fiber expands in your stomach soaking up water content. This expansion may result in a state of fullness. That means less risk of overeating.

Overeating is the reason why beer makes you fat. Whether you are drinking or not what remains the same is the importance of fiber in your diet to attain fullness as well as promote healthy digestion and smooth bowel movements.

To get full eating less getting enough dietary fiber in your diet is a definite must.

Lactic-acid bacteria and fiber for constipation

Yogurt is high in lactic acid bacteria that can help to put your intestinal environment in order curing constipation.

By eating yogurt with brewer's yeast added you can appreciate the synergetic effect that you get from brewer's yeast and yogurt in your diet including constipation-free bowel movements and healthier gut flora.

Side Effects and Setbacks of Brewer's Yeast for Dieting

Every drunk diet for women or men starts by making compromises or simply figuring out a solution. After mixing with yogurt, there may be people worrying about its bitterness. In fact there are tons of people who just can get used to it in the beginning.

To escape the bitterness off brewer's yeast in your yogurt, adding fruit is the key to making it work. Avoid high calorie sweeteners such as sugar and jam.

Posts Related to Brewer's Yeast Yogurt Diet Plan for Killing Hunger Soft That We Thought You Would Like: Staff Picked Interesting Articles Worth Reading

Start your day of keeping your diet in mind with a healthy bowl of plain yogurt and skim milk that does the body good. Yogurt for breakfast diet plan.

Is grapefruit as good as they say it is for you? If it weren’t then there would be no grapefruit diet to be talking about anyway. Fruit diet plan to control appetite.

For weight loss there is no more natural solution than dieting on probiotic yogurt. Roundup of simple to follow diet plans, health products, and tasty recipes.

Yogurt like other foods with probiotics get better as research drive diet and health to new and more exciting limits. Meiji R-1 Yogurt to boost immunity.