Want to eat less but can't?
Don't give up just yet. There's a way out. Natural supplement to kill hunger pain will get you diet back on the road again. Set sail! 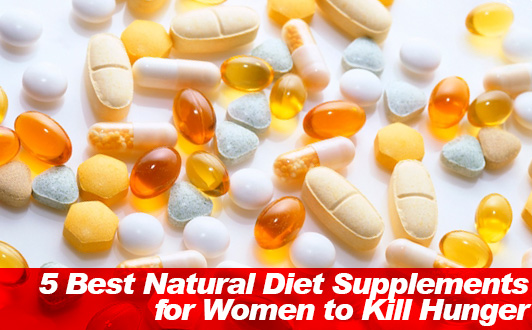 Natural diet supplement for women to eliminate hunger pains like glucomannan in found in Shirataki noodles, brewer's yeast to make beer, chia seed that people like to drink with their smoothies, sabja seeds grown in space, and Psyllium husk fiber found in nutrition enriched cereals act as a cornerstone to a balance diet promoting healthy appetite control. For controlling your hunger incorporating these 5 foods into your diet is highly recommended.

Dealing with hunger pains while on a diet is a necessary evil of any diet. However, just because you are having trouble right now pining down your hunger doesn't mean there aren't ways you can promote healthy weight loss taking natural diet supplements to kill the hunger pains.

Not all diet supplements are for women. There is to what it would seem like googols of different supplements sold in the market today. Trying to find the right way to promote healthy weight loss naturally can be like finding a grain of sand in the universe, not something you want to bet on.

Here we are going to introduce 5 natural supplements to help kill hunger pains. That means feeling less hungry between meals and to get full eating less.

How effective are supplements at helping to kill hunger pains?

Taking natural supplements to kill hunger 30 minutes prior to eating may it easy to get full helping your reduce your food intake without feeling hungry. In addition to helping you satisfy your appetite during meals, it also helps you get through the time between meals without snacking uncontrollably.

Although depending on the variety of supplement you are taking contents may differ, natural diet supplements contains dietary fiber, minerals, vitamins, and essential fatty acids help make up for deficiencies in your diet as well as reduce intake of calories.

By feeling less agitated with the feeling of an empty stomach you are less likely to build up with stress greatly reducing the risk of compulsive binge eating and gaining weight back after weight loss. Figuring out how to control your hunger makes dieting in the long term seem feasible.

Glucomannan powder, brewer's yeast, Chia seeds, basil seeds, and Psyllium husk are the best appetite suppressants you can buy to kill hunger pains eliminating the stress of feeling hungry all the time.

Glucomannan found naturally in Japanese-konyaku is a natural and completely safe way to kill hunger. Konnyaku glucomannan is said to expand to between 100 and 200 times is original size inside your stomach. Konjac is an extremely good source of dietary fiber that is said to even help block fat and sugar absorption in your digestive tract. It is one of the most effective natural appetite suppressants for weight loss.

Studies show weight loss in people who consumed 1 gram of konjac root glucomannan fiber with 8 ounces of water prior to eating a meal. Despite not chaining their eating or exercise habits, people on the glucomannan diet are said to have lost over 5 pounds over a period of eight weeks.

Glucomannan is commonly found in konjac root that in Japanese is konyaku, a fiber rich part of the Japanese diet. Shirataki noodles otherwise known as Miracle Noodles in the United States for its popularity is made with konyaku.

Traditionally, brewer's yeast is use to make beer. However, it is also known as a good source of nutrition containing amino acids, vitamins and minerals to supplement your diet. Dietary fiber in brewer's yeast is said to help promote smooth bowel movements.

Besides making alcoholic beverages like beer, brewer's yeast is said to be used to make food products such as vegemite, marmite, and soy sauce as well as added to other foods as a tasty flavor additive.

Chia seeds out of South America are a good source of the essential fatty acid, alpha linoleic acid, other amino acids, calcium, magnesium, and dietary fiber. They are said to expand up to 10 times their size inside your stomach.

Who doesn't love Chia seed? - Chia seeds have been a part of the human diet since ancient times when great civilization such as the Aztec and Mayans reigned over their lands. At the time they were the preferred military survival ration. It is said that a pinch of Chia seed could keep an Aztec warrior going for days.

On top of its use in weight loss, Chia seeds have many uses such as being used as a substitute for eggs, and an additive to yogurt. The use of chia seeds is popular in smoothies and yogurt based beverages.

Basil seeds from Thailand are said to expand to as much as 30 times their size inside your body. Basil seed insoluble dietary fiber is said to promote healthy gut flora arranging your intestinal environment. Combined with alpha linoleic acid, an unsaturated fatty acid, it is said to be effective in treating obesity.

Estragole poses a health risk. Basil seeds have been approved as safe for people to eat in moderation. Despite being approved by the over the last few decades, recent trends backed by supporting research demonstrates that basil seed estragole is both genotoxic and carcinogenic in rats. The Scientific Committee on Food backed by the European Commission has not yet specified the safe exposer limits of estragole in basil seeds.

NASA has taken an interest in cinnamon basil seeds. They were used to demonstrate that growing plants in a microgravity environment like space in small plastic chambers is possible. Like other technological advancements brought down to earth from the International Space Station, you can changes in how basil plants are grown on Earth in the near future.

Psyllium husk is one dietary supplement for fiber that needs no introduction within the weight loss community. Dietary fiber in Psyllium husk is said to expand between 30 and 40 times in size. Like basil seeds, it also promotes healthy gut flora improving your intestinal environment. In addition, it is also said to block the absorption of excess sugar in your diet helping to prevent blood sugar increases.

There are many uses of Psyllium husk, or the seeds of Blond Psyllium. Consuming the husk of blond Psyllium alone is said to relieve constipation. In addition, it is considered effective in lowering cholesterol, reducing blood sugar, and treating high blood pressure.

Although natural diet supplements rich in dietary fiber may help you kill hunger pains saying goodbye to binge eating and over-snacking, what about losing body fat? - For enhance fat blocking power in your diet and a proactive sure for constipation, you are going to need chitosan.

Posts Related to 5 Best Natural Diet Supplements for Women to Kill Hunger That We Thought You Would Like: Staff Picked Interesting Articles Worth Reading

A diet high in soluble dietary fiber may help you get full eating less. To get started why don’t you try out the psyllium diet? Say goodbye constipation.

Chia Diet to Help You Gain Full Control of Your Appetite

Chia seeds are huge inside your stomach that is. Yet people don’t seem to stop eating chia seeds to kill hunger pains. Chia benefits for weight loss and dieting.

What are foods to help lose weight? For one thing you are not going to want to miss out on sweet basil seeds in your diet program. Suppress your appetite.

With great health benefits you can see surfacing in your body the cabbage diet gives you what you need to reduce calorie consumption the natural way.

Everyone is talking about how to burn belly fat fast just by taking fat blocking chitosan. There is still time to start on chitosan weight loss before it’s too late!