Is being on the go keeping you from going to the gym causing your arms to flab out? With proper spot-reducing arm exercises you get it done anywhere. Turn your office into a conjuring ground for slimmer sexier arms now!

Lack of exercise is why women with flabby-arms blame their diet. Luckily there are arm exercises for women that can be done anywhere and anytime. Its time to start saying sayonara the flab hanging off your arms.

Everybody wants to know how the First Lady Michelle Obama can have such femininely toned arms at the late age of 40. Not only is she bold, always ready to make a fashion statement; she also has a trainer.

Have you lost weight around the waist, but … seen little improvements in tone of your arms? Where most diet and exercise programs fail at addressing flabby-arms is that they often overlook problems exterior to weight loss. That is why on top of what you are doing in your diet, it's important to take matters - your arms - into your hands.

How much would you like to believe you are actually using your arms? It turns out that most people only use the front of their arms, biceps, in the course of their daily lives. This leaves a hole in the exercise you get in the back of your arms – triceps – giving room for uncalled for flab to start appear. No one wants to be called turkey arms by their friends when getting dressed up.

That is why it's important to start to incorporate the use of your triceps into normal every-day routine.

For dieters looking to slim down and tone their arms this can be done by making a simple lifestyle choice. Even for people who aren't really interested in diet, but want know how to slim down their arms; getting the feminine slim looking arms can be as easy as learning to chew gum while you walk.

1. Using your arms more while you walk

Even for people not into deliberate exercise, walking is an activity that makes up a large portion of the day. While walking people often focus and their legs and stomach, straight posture lifting ones legs; however where people often lose focus is in their arms.

There is a big difference in the impression you get from someone with their hands in their pockets and someone who looks like they're running from the waist up. Be the person with “a little bit extra" and start walking away from deliberate exercise and into slimmer more dress friendly arms.

Swing your arms while your walk

Although there is resistance for people to swing their arms heavily in crowded areas, as long as you aren't bumping up on people, then it's time to get started slimming down those arms.

Your triceps are the muscles that tense up in the back of your upper arm as you reach out. How one gets flabby arms is by failing to extend their elbows out while walking. That is why as you walk, it is best to work ones elbows. For people with bags, alternating arms occasionally is recommended.

2. Working out your arms in transit

When riding the bus or any form of public transportation for that matter, standing riding the hand strap is a common occurrence that we've all learned to live with.  However, standing alone may be good for balance you are not going to see results in your arms unless you do it right – pay attention to body mechanics.

Holding on the way people usually do, unorthodox and resembling a person just trying to get home from a tough day a late night drinking, is only going to make your arms flabbier, ever becoming part of the bus after taking a sharp turn.

Although it is tempting to just go with the motions, changing how you spend your time in transit plays an important role in shaping your body. That is why at your own pace, 5 sets getting on another 5 before getting off is recommended.

As it creates fewer burdens on your body, bend at the elbow of the hand you are holding onto with, forming a 90 degree angle between your forearm and shoulders. Depending on your height or the height of the hand strap, maintaining this position may be difficult.

More importantly, it is best to focus on putting yourself in a position that allows you to work your triceps.

3. Exercise your arms while sitting at your desk

Although the thought of being able to exercise anywhere you go doesn't exceed the idea, exercising in a way that doesn't call for attention is not bad start.

Using the method we are going to introduce here, giving there is desk or any other level surface nearby and a few moments to spare, lets you exercise in places you're not use to such as at work or home. 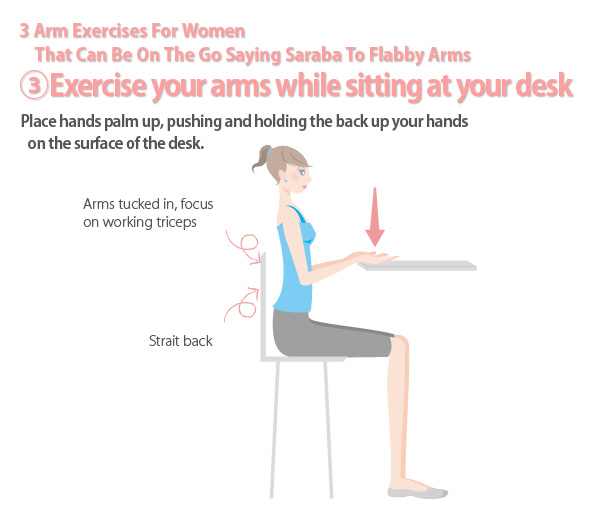 Upper arms stand out despite the season

To those people that think they can hide flabby arms behind their winter sweater just because its winter! Unfortunately, more than you would like to hear; the lines formed by your upper arms easily reach the exterior of any garment you choose to wear.

That is why instead of trying to hide it, its better to keep working at it. Despite the season, if your upper arms are flabby, they are going to stick out. So, don't let the winter months make you soft. Keeping you arms tone, slim, ready to fit into a dress is a continuous effort to maintain.

Although going to the gym weight training is fine and all, turning using your arms into a daily thing can help slim down those noticeable areas such as you arms without having to commit to deliberate exercise.

Posts Related to 3 Arm Exercises For Women That Can Be Done On The Go Saying Bye-bye To Flabby Arms That We Thought You Would Like: Staff Picked Interesting Articles Worth Reading

Chair dips can help eliminate flabby arms. Triceps exercises are the key to sexy arms that make it easy to get pull your sleeves up and breathe more freely.

Who said getting rid of flabby upper arm fat had to be hard? With dumbbell exercise for women it isn’t. Tone your arms without putting on monstrous muscle mass.

Choose between having bingo wings or exercise. Here is the best exercise for bingo wings you can do at home or at work. Tone your upper arms with chair pilates.

When it comes to speeding up your lymph system allowing you to tone upper arms there is no better solution than a manual lymphatic drainage massage.

Tone your body with at home exercise that saves you money not having to get a gym membership and time commuting. Exercise list for working out at home.

←Previous 7 Healthy Midnight Snacks That You Can Eat Worry-Free Without Getting Fat
Smarter Ways To Pick Your Protein: Using PDCAAS To Ensure Balance And Success In Your Diet Next→