Alcohol is not your only concern when trying to make weight. The greatest enemy when mixing diet and drinking is yourself.
Here are ways to keep your figure while drinking.

How much can you drink?

Whether you are someone who drinks everyday or not at all, you've experience that drinking too much alcohol contributes to undesired weight gains. Are you someone who likes to drink, but are concerned that doing so will take away your figure. Does drinking really cause you to gain weight?

If yes, you shouldn't quit drinking just yet. There are answers to these questions. Lets explore how drinking and dieting mix together.

You feel less full when drinking during a meal

The reason behind drinking and weight gain is not due to the presence of alcohol, but instead can be attributed to the food consumed while drinking.

I know there are a lot of people that share the experience eating too much potato chips; or developing an uncontrollable hunger while drinking. Why does this happen?

The liver has to work to break down alcohol

When alcohol enters the body it is rejected as it is considered to be a poison and sent to be processed by the liver.

The liver takes what is thought by the body as poison and turns it into something else, acetic acid, which is harmless to the body. Risking potential danger how do you think the body will react?

The liver has other things to beside break down alcohol, which play a large role in getting full.

The liver along with processing alcohol also metabolizes sugar, fat, and protein. In the process of breaking down carbohydrates, blood sugar levels increase.

Due to the increase in blood sugar levels the body tricked into thinking that it is full. Depending on the condition of the liver, stimulation from the brain telling the body that it has eaten enough may vary.

What do you think happens when the liver stops injecting glucose into the bloodstream when ordered to take care of more important matters?

Why is it that it is hard to get full while drinking?

As mentioned above, the liver is involved in metabolizing sugar and the break down of alcohol. So how do you think that it will react when you eat carbohydrates while drinking, having to process both tasks simultaneously?

The answer is that it can't. The liver is always busy taking care of the most important matter at hand.

The liver will give precedence to breaking down alcohol over metabolizing sugar.

What this means is that while liver is busy breaking down alcohol, it has no time process carbohydrates, making it hard to raise blood sugar levels. Thus, in this case, no matter how much carbohydrates are consumed it's hard to achieve the feeling of fullness that one would reach while not drinking.

For this reason, it is quite understandable that one might gain weight harboring an uncontrollable appetite. 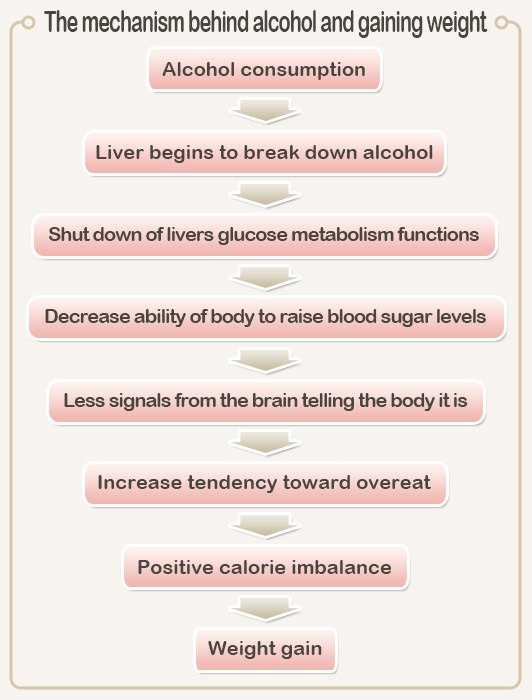 One thing to keep in mind is that alcohol has calories associated with it too. These calories are what are known as, empty calories, due to the fact that most of the calories are used to increase body temperature and promote blood circulation.

A reddened face is one example of increased body temperature after drinking.

For a person who is dieting or is considering the idea, using empty calories may be attractive at first; however there are important points that need to be noted.

One must be careful not to slump the calories associated with alcohol consumption with drinks and foods that are not process the same way. It is also not the case that that alcohol's empty-calories are empty.

For those concerned, it would be advised that they consider a low-calorie low-carb alcohol. It doesn't matter what type of drink, as long as its just alcohol, there is no reason to worry about gaining weight. In the mean time, while drinking it's important to be careful no to eat too much as it can be deceiving.

If you've read this article you might see how finding a diet-friendly alcohol choice shouldn't be considered friendly at all. Don't be deceived by thinking that if you only had a lighter beer or no coke in your mix that you can escape gaining weight that easy.

We've learned about dieting and drinking that the secret behind not gaining weight is being able to control ones hunger and selecting low-calorie alternatives while drinking. Doing this, one must be careful to trust ones judgment based on consumption volume levels over the brains functions that tell the body that it is full.

For example, whether you are drinking or not there is a satisfying and tolerable amount of food one eats. Using this as a rule, don't eat more than you usually do when drinking, even though you don't feel full.

Posts Related to Drinking and Dieting Made Easy: Simple ways to maintain weight That We Thought You Would Like: Staff Picked Interesting Articles Worth Reading

Escape The Drunk Diet: Drinking Alcohol On Your Appetite

Alcohol has a bad rap when it comes to dieting. Most people believe that drinking will make you fat. Take the best out of the drunk diet and what you will see is that it’s not what your drink it’s what you eat.

What Should I Drink To Lose Weight? 5 Drinks for Dieting

Here are 5 drinks for dieting that you are going to need in weight loss. When drinking water doesn’t cut it, there are other options. Here is what you need to be drinking.

Snacking Healthy For Dieting Without a Growling Stomach

Having a healthy snack makes a difference when it comes to dealing with a growling stomach while escaping the guilt of eating between meals. Tips for snacking healthy.

Drinking Beer Makes You Fat!? Getting a Beer Belly Myth

Drinking beer will not make you fat but eating too much snacks not putting a lid on your appetite will. Bust the beer belly myth and stop worrying about beer making you fat.