Home
Diet Tips
Tea in Pregnancy: 35 Teas and List of Caffeine in Tea

Tea in Pregnancy: 35 Teas and List of Caffeine in Tea

Are you drinking less than 200mg of caffeine a day from tea?
In pregnancy, drinking too much is not safe for you and your baby. Drink tea responsibly. 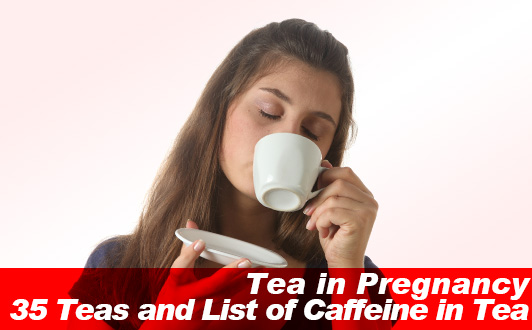 Is drinking tea safe during pregnancy? - Rules for tea in pregnancy to follow to avoid drinking too much tea while you are pregnant

Before getting pregnant drinking tea was just one of those things you did without thinking about how much caffeine is in it; and now you are drinking for two.

Not all teas are caffeine free.

Caffeine in tea is one roller coaster ride that you do not want to start your baby off before reaching adequate high to drink responsibly.

Drinking tea with caffeine is not safe during pregnancy

You may have noticed after drinking a cup of non-herbal tea (with caffeine in it that your heart rate changes. The same goes for your baby. Drinking too much tea during may increase the risk of miscarriage.

Caffeine is safe during pregnancy under 200mg a day

Too much caffeine in pregnancy is not good for you are your baby. Health care providers recommending drinking tea while limiting the amount of caffeine you put in your body to 200mg per day. That means cutting back the number of cups of black tea (**20mg of caffeine) your drink to 4 cups (1 cup, equivalent to 8 fl oz. or around 240 mL). On the other hand, decaffeinated black tea (** 1mg of caffeine). As you see there is a drastic difference in regular tea and decaf. Drinking decaf may be one way to stay under 200mg of caffeine per day. **milligrams of caffeine per 100g serving size - (USDA National Nutrient Database for Standard Reference Release 25, black tea / decaffeinated black tea)

Herbal tea and pregnancy: "it's better safe than sorry"

Angelica tea or dong quai may help with bloating and lifting your mood when dealing with PMS menstruation. However to the way it stimulates the uterine, drinking angelica tea during pregnancy to relax your uterus is not something you should be doing while pregnant. If you are pregnant and want it to stay that way, stop drinking angelica tea immediately.

Feverfew tea is an herbal tea said to be good for pain relief, bringing down your fever, and dealing with anxiety. However when pregnant it has been deemed unsafe having the potential to cause early contractions and even miscarriage. Although the effects it has on breast feeding is not yet known, drinking feverfew tea during pregnancy should be avoided.

Other unsafe teas to avoid drinking during pregnancy may also include flaxseed tea containing flax and passion flower tea, which are unsafe to drink during pregnancy because they might cause early contractions potentially resulting in premature birth.

Avoid drinking too much tea containing caffeine while pregnant for the safety of your baby. If you have to drink tea (with or without caffeine), as long as you stay under 200mg a day, you shouldn't have anything to serious worry about as far as you baby is concerned. So just drink responsibly. Herbal teas (especially those under warning by the FDA) should be drunk with caution while pregnant. Always make sure to read up before diving into herbal tea remedies during pregnancy no matter how beneficial the effects.

Drinking tea during pregnancy: 3 teas that will save you in your first trimester safe to drink even while pregnant and high caffeine teas to avoid after coming out positive

Red Raspberry leaf tea during pregnancy to deliver on time

Drinking raspberry leaf tea in pregnancy is safe to drink even while pregnant if drunk in the right amounts. It is one of those pregnancy teas that help you deliver on time, never too early or too late. Healthcare providers will caution that it shouldn't be drunk before the end of your first trimester.

Rooibos tea is a pregnancy tea that is safe to drink even while pregnancy. One characteristic that makes drinking rooibos tea more viable than drinking caffeinated teas is that it is low in tannins said to interfere with the nutrient absorption of iron in your diet. This is advantageous when worrying about how much iron you are getting in your diet.

The average American drinks about 3 cup of coffee per day (1 cup equivalent to 8 oz or around 240mL). The same may be said about tea drinkers. If you are drinking teas with around 70mg of caffeine such as China white tea, you should consider cutting back on the amount of tea you drink daily or switch to a different type of tea such as decaf. Assam black tea should be avoided at all cost due to the fact that it is high in caffeine.

Posts Related to Tea in Pregnancy: 35 Teas and List of Caffeine in Tea That We Thought You Would Like: Staff Picked Interesting Articles Worth Reading

Take control of your weight even when pregnant. During pregnancy you aren’t going to be able to get away with normal diets. That’s why there is a pregnant diet.

The Dangers of Caffeine Tolerance and Why to Limit Your Intake

When you need some energy, most probably you drink a cup of coffee or an energy drink. However, you should also think about the coffee effects on the brain. Caffeine is a chemical substance just like any other substance so it is just normal for it to have some side effects you may have never thought about.

What Should I Drink To Lose Weight? 5 Drinks for Dieting

Here are 5 drinks for dieting that you are going to need in weight loss. When drinking water doesn’t cut it, there are other options. Here is what you need to be drinking.

Coffee Diet: Benefits For Weight Loss To Help You Get Slim

Guide to going on the coffee diet. Ways to get slim with all the benefits of drinking coffee for you to take home. Increase metabolism to stay in the fat burning zone.

Think having low body temperature is slowing down your metabolism? Then, you need to try ginger water. Explore the ginger health benefits of hot water.

←Previous How Often Should You Work Out? 5 Times a Week Is Enough
7 Ways to Use Whey Making Good Use of Greek Yogurt Water Next→