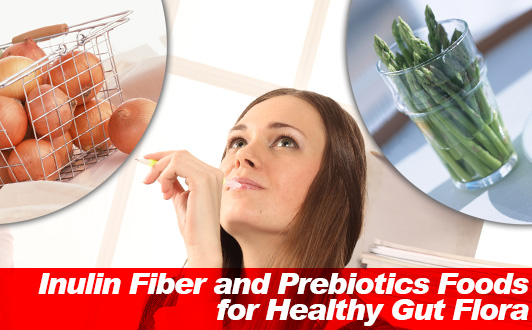 Inulin foods contain what are known as super-complex carbohydrates. Insulin fiber in addition to serving as a food additive substitute for sugar promotes healthy gut flora, the ultimate prebiotic. Prebiotic foods with insulin including bananas, corn, and garlic are low gi making it easier to control blood sugar. A diet with inulin may lower cholesterol and is said to aid in the absorption of calcium. For best results combine with resistant starch foods.

Inulin is a polysaccharide that despite being used as a substitute for sugar is in fact a fiber belonging to the dietary fiber fructans. For this reason it is sometimes referred to as sugar fiber. Fuctan fiber known as fructo-oligosachcharides (FOS) contains long carbohydrate molecules (complex carbs) used by some plants as a mode of energy storage. Inulin complex carb passes through your digestive system not metabolized until reaching your colon.

Inulin like other fibers is not absorbed during digestion but instead pass through your digestive tract otherwise known as the gastrointestinal system intact unabsorbed. Inulin fiber is said to promote healthy gut flora said to probiotic effect on the body.

Inulin fiber derived from inulin sources such as foods with inulin like root chicory and other natural sources of inulin like, onions, leeks, and garlic. That fact that it has a low glycemic index makes it advantageous to take for people looking to control blood sugar levels.

Side effects of too much inulin

Fiber in inulin foods can be found added to processed foods like chocolate bars and other snack foods can backfire in your diet causing unwanted stomach aches. Eating too much inulin fiber in your diet may come with side effects. That is why although many benefits come along with eating foods with inulin, you should only do so in moderation.

Inulin and psyllium are both sources of water-soluble dietary fiber. However, unlike inulin that has a gassy effect on the body, psyllium lies quite while absorbing water softening your stool. In addition psyllium isn't accompanied with side effects of overuse such as intestinal bacterial overgrowth. On the other hand, there have been reports of allergic reactions to fiber enriched cereal with psyllium. The same goes for inulin.

Inulin supplements serves as a psyllium-free solution to supplementing your diet with extra fiber in addition to feeding the good bacteria in you digestive system.

Foods with inulin such as chicory root, onions, bananas, corn, and garlic gives your health benefiting inulin fiber without having to resort to supplements that tend to be costly in the long term.  However, depending on the natural source of inulin fiber you chose to consume, the inulin content may differ. Due to the gassy nature of foods containing inulin increased consumption of inulin foods may lead to more gas.

The inulin content in onions being between 2 and 6 grams per 100g serving size may not seem like much at first. The phytochemical content (quercetin and anthocyanins), eating onions gives you both inulin and polyphenols for antiaging.

Asparagus along with chicory root and the Jerusalem artichoke is one of the best natural sources of inulin fiber available. Based on the assumption that asparagus contains only 5% less inulin than chicory root, the inulin content of asparagus is between 13 and 18 grams per 100g serving size. Asparagus is also packed with antiaging polyphenols that may slow down the effect of aging.

The Jerusalem artichoke is one of the top 3 foods high in inulin fiber alongside chicory root and asparagus. It is a tuber (potatoes-like vegetable) weighing between 75 and 200g dry. In addition to being a good source of other valuable nutrients, the Jerusalem artichoke is considerably high in potassium. It is said to have 14 to 19 grams of inulin per 100 gram serving size.

Garlic has between 9 and 16 grams of inulin per 100 gram serving size. In addition to being as good source of inulin fiber, it is considered to have strong natural antibiotic properties.

Inulin contains only a fraction of the energy found in sugars and fat. That means less energy intake to worry about when dieting.
There are only 1.5 calories per gram of inulin. Compared to sugar (4Cal/g) and fat (9Cal/g), inulin calories are relatively low calorie.
Due to the fact that inulin contains significantly less energy than sugar and fat, its use in health food is on the rise.

Due to the fact that inulin is not broken down until it reaches the colon, it has little to no effect on your insulin levels making it super low-gi along with one of the best ways to control blood sugar whether you are diabetic or not.

Inulin promotes healthy probiotic gut flora making it a prebiotic acting as food for intestinal bacteria. Intake of inulin not exceeding the recommended daily intake improves the efficiency of your digestive system.

ABRAMS, Steven A., et al. An inulin-type fructans enhances calcium absorption primarily via an effect on colonic absorption in humans. The Journal of nutrition,2007, 137.10: 2208-2212.

Bottom line on inulin in foods

Inulin combined with resistant starch is rumored as the super prebiotic. Recent studies suggest that the combination of inulin fiber and resistant starches, resistant starch with inulin produces a synergetic effect said to the leading edge in remedies to promote a healthy gut. However, one side effect to be wary of is the consuming too much inulin. Overconsumption of inulin may cause stomach problems due the overgrowth of gut flora that feed on inulin in the body.

Posts Related to Inulin Fiber and Prebiotics Foods for Healthy Gut Flora That We Thought You Would Like: Staff Picked Interesting Articles Worth Reading

A diet high in soluble dietary fiber may help you get full eating less. To get started why don’t you try out the psyllium diet? Say goodbye constipation.

Are you getting enough fiber in your diet? If you haven’t already considered getting more dietary fiber from vegetables, it is a start. More fiber for healthy weight loss.

Eat less and still get full? With ample insoluble dietary fiber foods in your diet you don’t have to worry about getting hungry again. Fiber rich foods list.

←Previous Resistant Starch Diet: 10 Foods for Healthier Gut Flora
Lemon Diet: The Detox That Works With Benefits of Lemons Next→